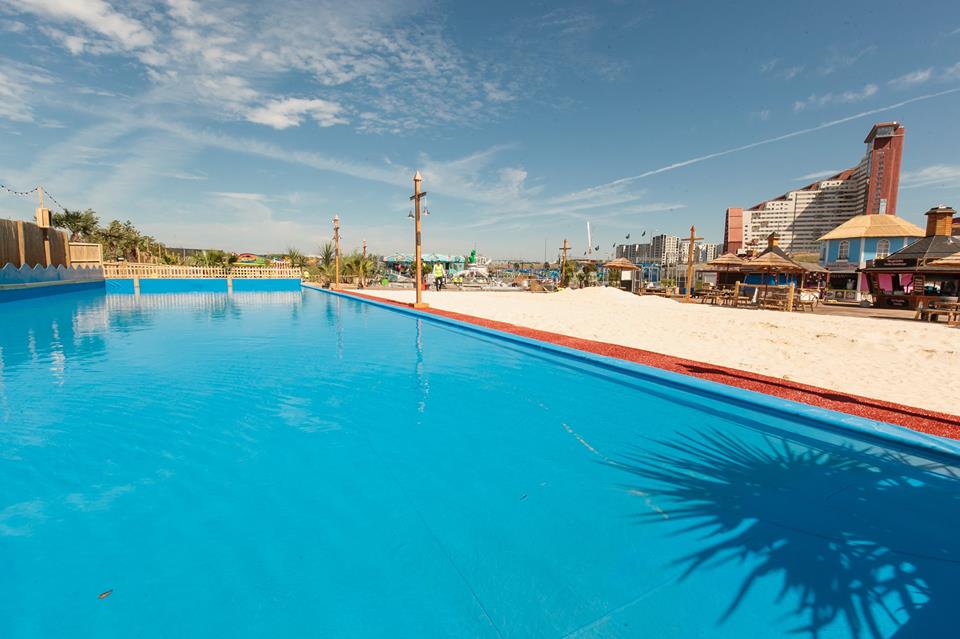 Sure, Miranda Eason can see its appeal. But would she go again? Er....

With hindsight, going on its opening day, a scorching hot Saturday, was probably not the best idea I’ve ever had. I’m not sure exactly what I was expecting; perhaps a place that would make my friends who have recently decamped to Cornwall and Hastings realise how silly they were to leave London behind.

My sister, along with my four year old nephew and two year old niece, were visiting for the weekend and I thought a visit to Beach East would be an excellent way to pass a couple of hours. We arrived around 2pm after a longish stroll – at least at the pace of a two year old who prefers walking to being pushed in her pushchair – from Stratford tube station. The place was packed. Like the Central Line at 8.15am and 6.15pm on a weekday.

Entry to Beach East is free, which basically means you can sit on the sand – for free. That’s if you can find a spot. We did, squished in between families who had been much more organised than us and brought along buckets, spades, picnics, sunshades, towels, toys, windbreaks (I might be exaggerating when it comes to the windbreaks) but basically everything you would take for a day at the seaside.

The sand rivals the Caribbean for colour and softness and there are large pools to play in, but they were so full of people paddling and zipped into giant rubber hamster balls (why?) that we steered clear. After a couple of minutes trying to build sandcastles with our hands my sister decided to go and purchase some equipment and some drinks, returning with two bucket and spade sets and two slushes in an alarming shade of blue (£10 for the lot). We got on with the serious business of building sandcastles, and avoiding being stood on by people who were trying to find their place on the beach, which kept us entertained for the best part of an hour. Until the troops got restless, and we decided to have a wander to suss out our options.

You won’t go hungry at the beach, as long as you have enough cash on you – every few paces you pass another food stand selling burgers, chips, hot dogs, ice creams, noodles and so on (but no streetfood stalls, alas). Not all the rides were open but plenty were, costing between £2 and £4 a pop. There are also lots of those games where you have to hook something with a rod, or throw a ball into, or throw something else in order to win something that, to an adult looks like a load of tat, but to a child looks like the Best Thing In The World Ever.

My niece and nephew are huge Minions fans, so you can imagine their excitement when they spotted the “win a Minion” stall. We hurried over and watched as person after person paid £2 to try and chuck a ball through a hoop. Person after person failed. After ten minutes of this, even my four-year old nephew had realised it was a pretty futile game and had stopped asking to have a go. Instead we headed to the Race-o-Rama ride and pretended to drive cars in circles for a couple of minutes, which the niece and nephew loved and, I have to admit, I quite enjoyed too (£6 total).

We would probably have stayed longer but my nephew had taken note of the boat tours earlier and was keen to swap sand for the high seas, or at least the river that runs through the Olympic Park; but not before the twosome had cashed in the promise of an ice cream each (£6 total). Cones discarded, we had a lovely time pootling along the river for 45 minutes, seeing the iconic buildings from a whole new angle and learning about the park, and the wildlife that’s made the park its home (£20 for two adults and two children).

Overall, I wouldn’t go back to Beach East without small people in tow, but then I’m not sure why you would (although there were plenty of people seemingly without children who seemed to be having a lovely time). It’s worth adding that it was several hours late opening (that was the major gripe on Facebook, too) and a chunk of it still wasn’t open mid-afternoon Saturday.

However for local families I think it’s great that there’s a beach to enjoy this summer without a long and expensive train journey to get there, if you can withstand the non-stop pestering that the beach seems to have been designed to create. I would however highly recommend the boat tours.

Now, about those weekend visits to Cornwall and Hastings…

Want to visit a summer beach in north London instead? Course you do. Read our feature of three of the best on Kentishtowner here

3 thoughts on “What is Beach East, Stratford really like?”