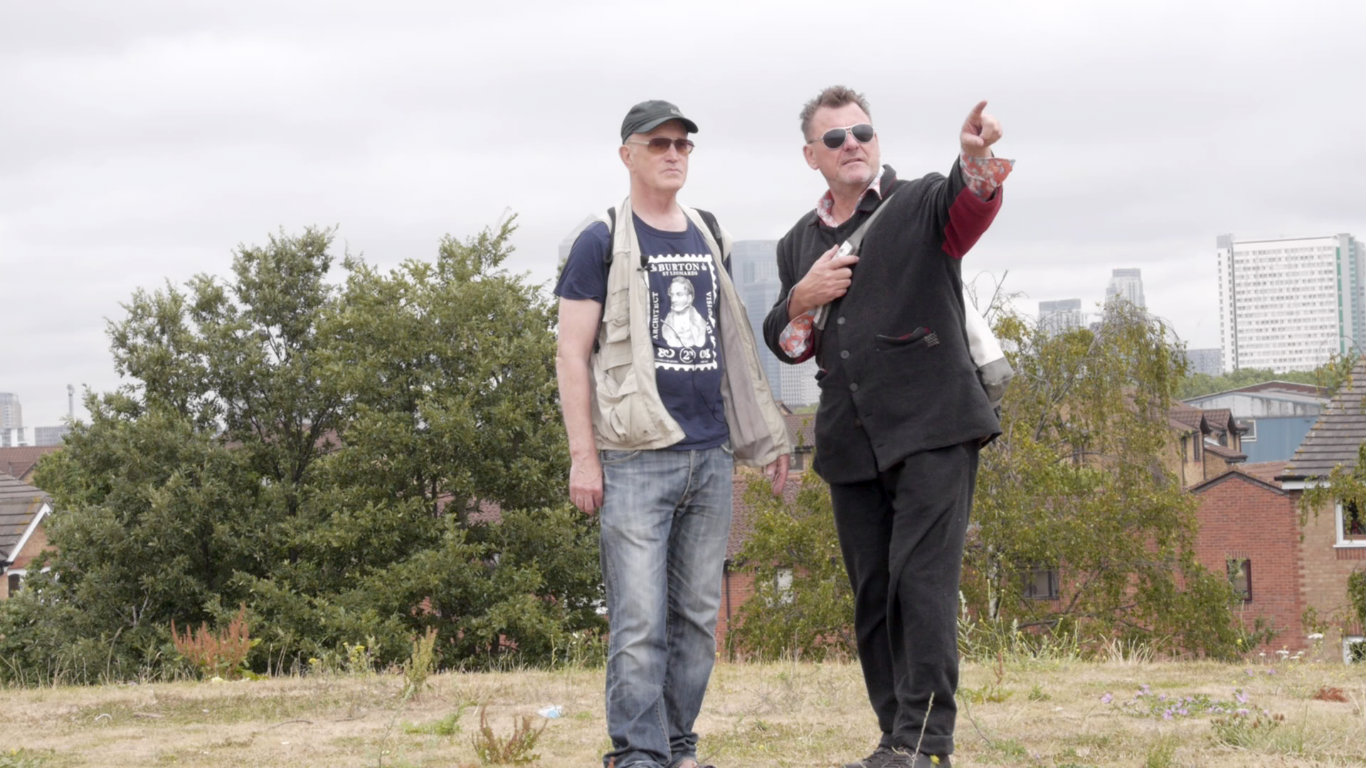 A freezing cold January night and I’m running up Mildmay Grove towards Canonbury Station trying to get ahead of legendary London writer Iain Sinclair and his companion, vaunted avant-garde film-maker Andrew Kötting.

They approach my camera, walk past, I spin to catch them striding away into the night and then set off puffing to repeat the process. They barely broke stride all the way from Iain’s home in Hackney to Hampstead Heath where my evening ended in the fried chicken shop opposite the station. They continued their nocturnal circuit of the London Overground through the night completing the 35-mile loop at 10.30am the next morning.

This was just one shoot from several walks that make up my film London Overground which I’m chuffed to bring home to Leytonstone, where I’ve lived for the last 10 years, for a screening at the Pop-Up Cinema in Leytonstone Library.

The film follows Iain Sinclair retracing the steps of the epic one-day schlep from his book of the same name. The original walk was also in the company of regular collaborator Kötting but in the reverse order, starting in the morning at Haggerston Station and trailing the ‘Ginger Line’ clockwise around its newly completed circuit returning to Hackney at night.

When Iain suggested the idea of making the film after I interviewed him about the book, I immediately started making mental calculations of the logistics, how many batteries and memory cards I’d need, how many cans of Stella Artois to lubricate my dodgy left knee.

But thankfully we decided to span the filming over the course of a year, bringing in other voices from the book, Bill Parry-Davies of Open Dalston, Chris Petit, director of cult road movie Radio On and author of Berlin Noir fiction, and Kötting dressed as a Straw Bear to stalk the junction on the Old Kent Road where he nearly died in a motorbike accident.

Arriving at the Rio Cinema in July for the premiere in the East End Film Festival just a year from the first walk and shoot was a great feeling. I shot and edited the film myself and here it was on the big screen of a cinema I used to frequent for late night screenings when living in Hackney in the early 90s.

The East End Film Festival had provided the premiere for my first feature documentary, The London Perambulator in 2009, a film that went on to play at numerous festivals and a sold out special event at Curzon Soho. Iain Sinclair features in the film alongside Will Self, Russell Brand and Nick Papadimitriou – a project that had developed from a YouTube video that I’d sent to Iain and he’d encouraged me to pursue further.

We stayed in touch over the intervening period. Iain was an important modern reference point for my book This Other London – Adventures in the Overlooked City. A year spent walking the Overground in the company of the great chronicler of contemporary London was a dream project.

Part of Iain Sinclair’s genius is his ability to find the journey that represents the current mood and theme of London. His 1991 book, Downriver, brilliantly captured the end of Margaret Thatcher’s reign, travelling out to Tilbury and Gravesend, charting the transformation of Docklands – revisited in our Overground film.

London Orbital, a yomp around the M25, finds the bizarre millennial world of the early Blair years taking shape around the fringes of the metropolis; and now with this latest walk around the ‘Ginger Line’ we see a new London taking shape in the railway arches and the shining apartment blocks built to take advantage of the new quick route into the City.

The landscape of Overground moves through a “shifting territory” of London, the walks forming a “series of psychic mappings”, as we follow the railway from Haggerston over the river to Rotherhithe, right round to Willesden Junction, back down to Clapham and Battersea, across to Dalston and Whitechapel, south again to Brixton – devoid a stop on the railway, but a key nodal point in Sinclair’s own narrative.

What emerges in both the film and book is ‘a tiny little map of what is happening now’ in London.