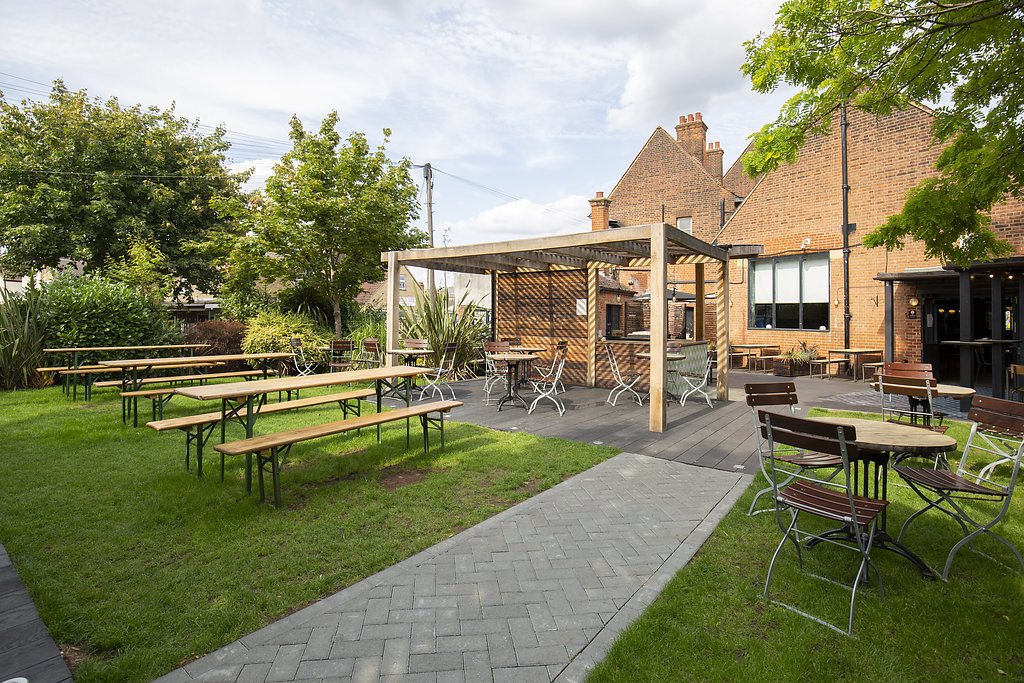 So you’ve never been to…the garden at Heathcote & Star

If you haven't been to this bucolic outdoor space, this weekend is surely the time

Age: One and a half; nearly a toddler then. Oh, you mean the pub itself? Well, this grand Edwardian pile was a traditional boozer until it closed in 2014, before reopening three years later.

Where exactly is it? On Grove Green Road, where there’s been a bit of Mini Holland pedestrianisation, which makes this corner of E11 a helluva lot more attractive.

Why should we go? Well, capacious and rather stylish interior aside, it has one of the leafiest beer gardens in the postcode. It really is something. Surrounded by mature trees and bushes, there’s a central tiled bar, adorned with bunting for village-fair-meets-cantina vibes, with sturdy benches, tangerine-coloured deckchairs, and various covered (and partially covered) dining terraces.

Plenty of grass, too? Hell yeah – perfect for our aged Jack Russell to lie on. The only shame was that, although the sun was shining when we sat down, it swiftly disappeared behind a duvet of cloud. At least the slowly swelling crowd of punters and their offspring didn’t seem to care.

What to eat? Previously we’ve done vegan here, but a wrap packed with fried juicy buttermilk chicken thigh, crunchy red cabbage slaw, and Gojuchang mayo (the spicy, savoury Korean one) was next-level delish. It was very substantial for £9.

How about sides? You really don’t need them – unless you’re starving. Or at least share one between two. Our fried pickles – sorry, frickles – were fun (with a moreish smoked paprika dip) but the portion was huge; ditto a generous additional bowl of tasty sweet potato chips, with garlic and coriander sour cream.

What do I drink? Well, there’s all the usual craft beer – perfect for a sunny beer garden – but we sipped optimistically on ice-cold fishbowls of Cotes de Provence rosé. So that was why the sun went in.

What’s the service like? Plus points for extremely friendly manager, although our prolonged wait for the wraps proved just a little testing, especially as the pub was far from packed early on a sleepy bank holiday lunchtime.

Do say: ‘Is the garden child-friendly?’

Don’t say: ‘Is this the Northcote?’