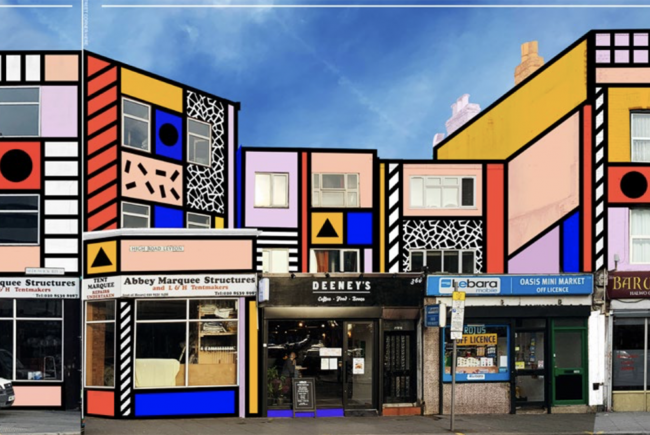 Pre-lockdown, Scottish streetfood caff Deeney’s was, as most readers will testify, one of Leyton’s most popular spots for brunch, toasties or – for us at least – a sneaky afternoon pint. And that’s before we rave about its inventive and delicious run of evening pop-ups.

Anyway, a year or two back, just after they moved to the current two-floor premises, Deeney’s head honchos Carol and Paddy got chatting to Andy de Vries of local animation studio Mighty Elk.

Andy thought the street could benefit from “an artistic intervention” – why not? – and that the uniquely shaped buildings would be most suited to a mural.

Looking for an artist with a strong positive aesthetic – as well as the expertise to deliver such a logistically complex project – the pair approached East London-based Camille Walala.

Having created murals, building façades and installations in locations from Mauritius to Mayfair, Walala has a track record in using “bold colours and dynamic geometries to energise urban landscapes”, say the pair.

And she has embraced the opportunity to inject a bit of joy into this central Leyton strip via a large-scale, street-spanning mural. The idea is that it will elevate this part of the High Road to the section up by the Technical, which was redeveloped for the 2012 Olympics.

Like many projects, it was all going so well until, of course, the lockdown. “Just before the crisis escalated,” says Paddy, “we had amazing news in the form of £25k funding from the Mayor of London fund, as well as some super generous donations from local businesses and residents eager to see the rejuvenation of this section of Leyton High Road.”

Having gained a huge amount of traction, Walala Parade was on track to reach the target amount needed to come to fruition. “But then the madness started and, as a nation, our focus shifted to staying home and staying safe with our loved ones, and rightly so.”

As it stands, they’re now still extremely close to the target: “It’s 92% of the way there with only £2,981 left to raise and 27 days left on the crowdfunding clock,” says Paddy. “So now it would be even more heartbreaking if we let this amazing opportunity slip away and we have to start from the beginning again.”

So, if you have the capacity to donate, whatever the amount, Walala Parade is still accepting pledges. “We understand that there are other, very important things to be funding at the moment,” Paddy says, “but if you did feel like contributing, then perhaps this could be something amazing to look forward to, and we can emerge from the darkness to a beautiful Camille Walala-designed high street.”

Follow @walalaparade on social media. It needs to reach the target of £37,330 by 26th May. Help it do so and find out more about the project here. Deeney’s is open for takeaway toasties, burgers and coffee, 10am-3pm daily, at 360 Leyton High Road E10

UPDATE JULY 2020: It smashed its target! So the Walala Parade will be coming to life summer 2020.

We may have just reached our 5th birthday, but until recently Leytonstoner’s existence was funded by its sister titles’ print editions, which have now closed due to advertising revenues in freefall. This means both Leytonstoner and our small network of independent online titles is under threat. As readers we need your support more than ever to keep delivering ‘good-news’ cultural stories that celebrate our wonderful neighbourhoods. Every reader or business contribution, however big or small, is invaluable in helping the costs of running the website and the time invested in the research and writing of the articles published. Support Leytonstoner here for less than the price of a coffee and it only takes a minute. Thank you.