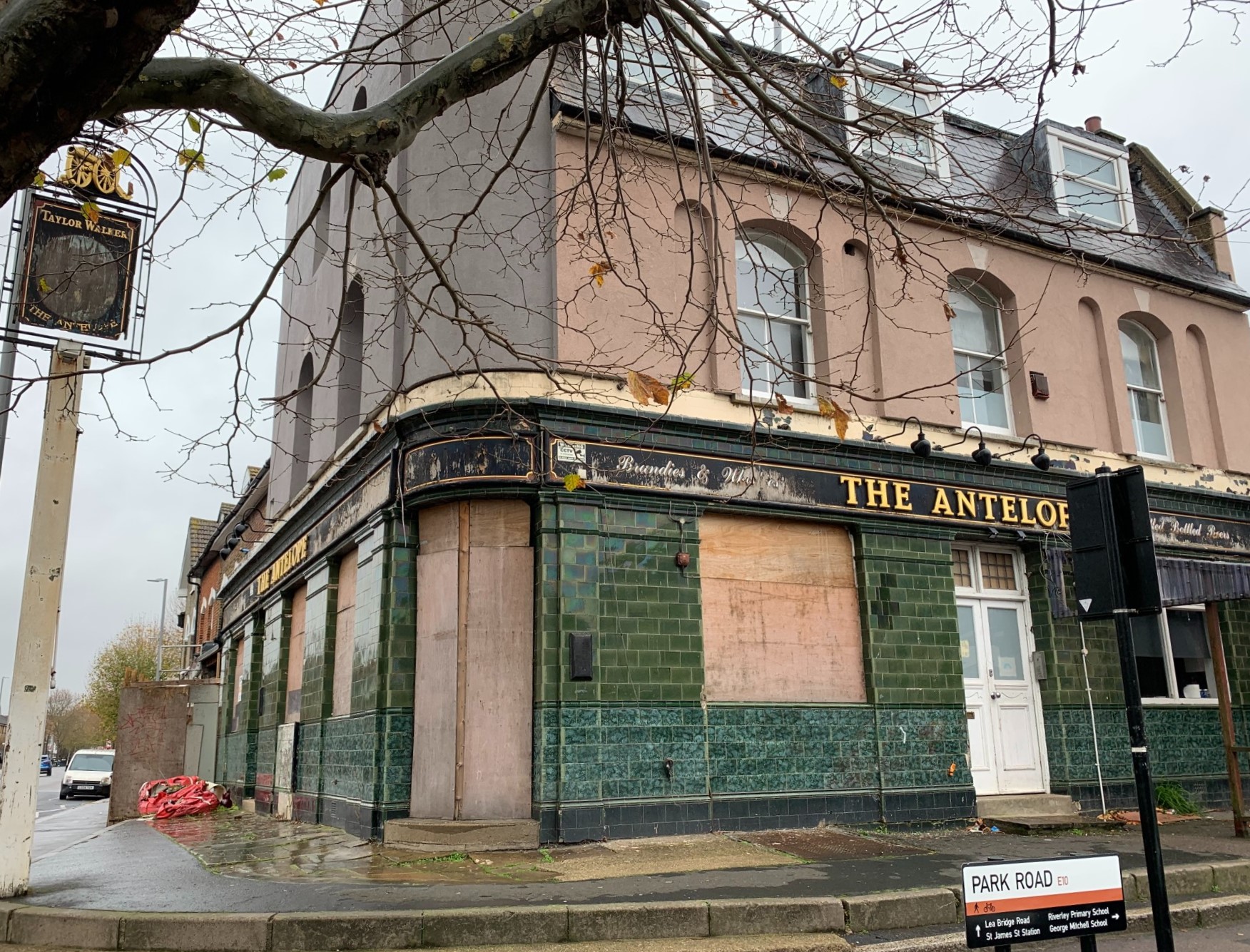 Every time we walk down to Jubilee Park – unless it’s via the brambly old churchyard – we pass The Antelope and cast a frown at its boarded-up forlorn beauty. That bottle-green tiling! That signage!

Proudly standing on the corner of Church Road and Park Road, the curiously-named pub was first licensed in 1879, and served the local community for over 140 years until its close in 2014.

It’s also of historical significance, due to Marsh Lane opposite, which leads down to what were once Leyton Marshes ‘Lammas Land’, cultivated for hay in summer but where locals had the rights to graze cattle and horses in autumn and winter.

In particular, the pub itself was the meeting place for the ‘Wrecking Party’ back in 1892, a group that attended a 3,000-strong demonstration on the Marshes against the development by the East London Waterworks company of common land used for grazing.

As the plaque (see pic, below) on the Jubilee Park cafe building testifies, the power of the people prevailed – and on ‘Lammas Day’ 1892 the fences were taken down and the locals successfully challenged the company, leading to a law that enforced the marsh to be kept as open space.

130 years later, it’s time to act again. “The developers have ignored a council enforcement on them to restore the ground floor to usage as a pub,” says Curran McKay, who is leading the campaign. “Instead they have converted it into a dwelling and plan to fight the council, implying that no one cares.”

A report from the developers stated this week that it was flatly no longer viable as a pub. “It’s clear that this is a complete fabrication designed to flimsily support their determination to remove the pub facility entirely from the community,” he says.

“A claim of thirty pubs in the local area includes 14 that have never been pubs or held a liquor license, and states that Searcy’s, a champagne bar in Westfield Stratford is “competition” to The Antelope.”

Which is ridiculous, of course. It even states a lack of support from the wider community. “This is demonstrably false,” says Curran. “We’ve gathered over 1,500 signatures in under a week and the commitment of almost 250 volunteers, including interior designers, an architect, project managers, publicans, marketing & PR consultants, civil servants, lawyers and more. There is the skill and the will to relist The Antelope as an Asset of Community Value, secure the lease or freehold, and place this historic building back at the heart of Lea Bridge.”

The Antelope was granted status as an Asset of Community Value in 2015, when at least one offer to take on the pub was also made. It was even mentioned recently in council literature as part of the local regeneration and a place to be protected.

As we know from other popular E10/E11 pubs, such as the High Road’s Coach & Horses, the legendary Northcote, or the lovely Heathcote & Star, there’s more than enough space for everyone within the walls of these old Victorian boozers, and for everything from morning coffee and daytime co-working to boozy dinners and rotating pop-ups in the evening.

Our local watering holes are also – post-lockdown – even more essential spaces for community events, from knitting clubs to drag nights and movie showings. Let’s all make it happen: Antelope Day here we come!

Oh, and while we’re at it, surely the very useful (and equally very stylish) Francis Launderette, above, can be stopped from becoming flats?

Apparently its time is up as a launderette, but shouldn’t that gorgeous vintage signage and interior at least be saved, not to mention its ongoing status as important retail outlet on Francis Road?

For more on all this, read (or sign up here for) this week’s Weekly newsletter.

Don’t forget, if you haven’t already, to join the campaign to Save The Antelope here. And if you care about Leyton Marshes, read last week’s feature here.

If you value our existence then we need your help. Until last summer Leytonstoner was funded by the free monthly print editions of our sister titles Gasholder and Kentishtowner, which have sadly closed due to advertising revenues in freefall. This means both Leytonstoner and our small independent network of online-only titles is under serious threat. Every contribution is invaluable in helping the costs of running the website and the time invested in the research and writing of the articles published. Support Leytonstoner here for less than the price of a coffee and it only takes a minute. Thank you.