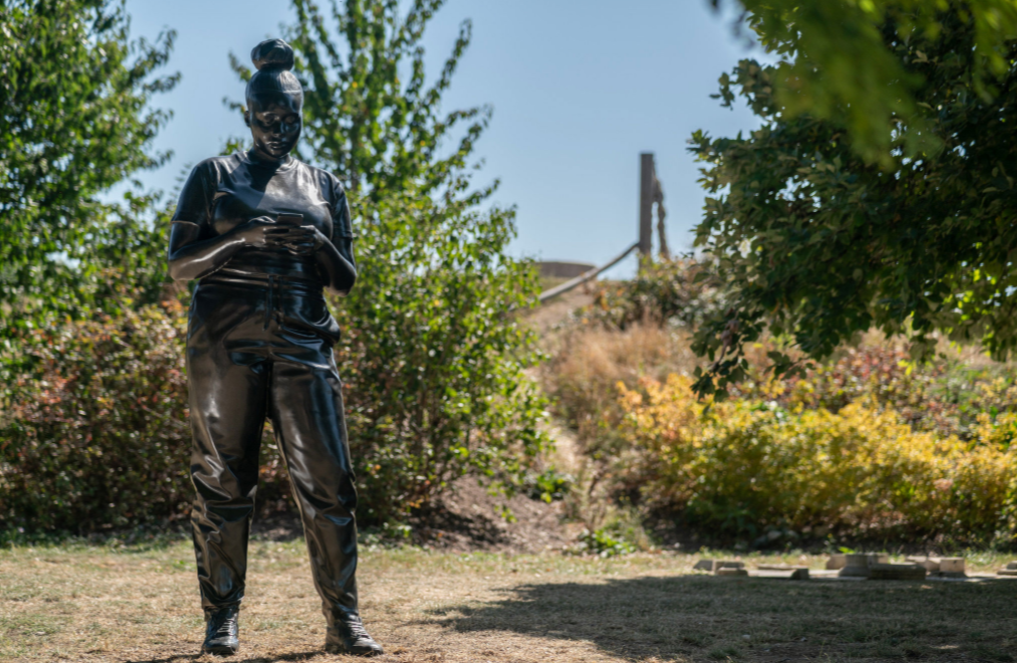 The Line: walk the art trail from Olympic Park to Cody Dock

Is The Line really London’s first dedicated “public art walk” – as its website unequivocally suggests? If that’s the case, then well done all involved, but it begs the question: what on earth has the capital been doing all these years? Especially when towns like Folkestone – not so far away – boast their own stellar art trails.

Whatever its status, one thing’s for sure: The Line is a culturally rich waterside route that opened back in 2015, originally stretching between the Three Mills Wall River Weir and The O2, following the line of the Greenwich Meridian.

As part of its fifth anniversary, this year it extended over into the Olympic Park. Which perhaps explains why we’ve only just started seeing it on social media feeds.

A bit more backstory? Rewind five years and The Line launched its first sculptures by Damien Hirst, Eduardo Paolozzi and Thomas J Price, all whom came through an open submission. They were selected by a panel that included Turner Prize-winning artist Mark Wallinger, philanthropist Anita Zabludowicz and Simon Myers, local resident and founder of Cody Dock (more of which below).

While the trail includes works by artists across a broad geographical area, the sheer ambition and scale of each sculpture means even if you see just three of four on a single walk, you won’t be disappointed. And the scenery is as stunning as the art, too.

So back at the Olympic Park, after gawping, as we always do, at Anish Kapoor’s towering Orbit, we start our journey by heading south, following the clear map (download the app), and crossing Stratford High Street to the towpath alongside the Three Mills.

Ten minutes or so later, we’re at the next artwork, Reaching Out (our main pic, above), a mesmerizingly tall 2.9 metre sculpture by Thomas J Price of a girl holding a mobile phone. If nothing else, it’s a bold reminder, in fact, to live in the moment and stick the damn thing back in your pocket.

This part of the walk is truly magical: big skies, utilitarian bridges and cracked tidal mud prevail, with post-industrial apartment blocks springing up on the opposite banks, in all a compelling juxtaposition of ancient and new.

This is underlined by the most attractive section, the cobbled street and extremely photogenic grade 1-listed 18th century House Mill. Built in 1776, it’s the world’s largest surviving tidal mill, a gem of the early industrial revolution, and, as the info rightfully states, one of the best kept secrets in London. Its jaw-dropping beauty feels transformative, like we’re suddenly on a (much-needed) mini break in another city.

The sculptures are spaced out so it’s quite a trek to the next, the futuristic sounding DNA DL90 by Abigail Fallis: be careful to follow the River Lea on the map, lined with rusty barges and narrow boats, rather than the Limehouse Cut, as otherwise you’ll be retracing your steps, as we had to.

At least when we arrive, we quickly realise that this one’s impossible to miss: twenty-two shopping trolleys are piled on top of each other sky-high, in the shape of a helix.

The work was commissioned by a supermarket in 2003 to raise awareness of the 50th anniversary of Francis Crick’s discovery of DNA’s double-helix sculpture; trolleys also being a sign, says the artist, of “consumer culture’s embeddedness in our own DNA”.

But you don’t have to know any of that: just ponder the dystopian vision rising before you, with all manner of cranes and half-finished blocks behind for maximum urban contrast.

Another mile or so downriver casts a different tone. Cody Dock is presided over by Joanna Rajkowska’s The Hatchling, a large-scale replica of a blackbird’s egg. Walk right up to it: the sounds of hatching chicks, the egg itself acting as a speaker, are there to remind us of the birds that live in city, and the “fragility of their environment”, says the artist.

More fascinating still, perhaps, is the dock itself, where the East London section of The Line trail ends. Originally built in 1871, Cody Dock was constructed by the Imperial Chemical Company for the purpose of unloading coal from barges.

Later bought by the Gaslight and Coke Company, it was then taken over by British Gas, before the buildings fell into decline from the late 1960s with all production stopping in the early 1980s.

Although the Docklands Development Corporation moved in during the early 90s, they blocked it off, and it wasn’t reborn until November 2009, when the Gasworks Dock Partnership was formed by local residents to provide a community-led regeneration.

Happily it’s now a creative industries quarter with pretty gardens, craft workshops and an exhibition space. Grab a drink or snack from the on-site cafe and sit for a moment on a picnic bench, admiring the awe-inspiring views over the broad river, with its bulrushes whispering in the breeze, and minimal arc of a bridge beyond. As the mid-afternoon sun dips behind the clouds, it feels like a truly special discovery.

It’s now well past lunchtime and reality hits: we’re starving, so march to the nearest station, Star Lane, and hop on the DLR a couple of stops back to Stratford for a swiftly devoured roast at the waterside Print House.

But if you do wish to continue The Line from this point, take the DLR instead south to Royal Victoria, then the Emirates Air Line cable car over the river to North Greenwich for the remaining works by Gormley, Richard Wilson and Gary Hume, amongst others. Either way, it constitutes a proper day out: we’ll report back with our own part two very soon.

The Line has a useful website and various related apps to get the most out of it. Find out more here

We may have just reached our 5th birthday, but until recently Leytonstoner’s existence was funded by its sister titles’ print editions, which have now closed due to advertising revenues in freefall. This means both Leytonstoner and our small independent network of online titles is under threat. As readers we need your support more than ever to keep delivering ‘good-news’ cultural stories that celebrate our wonderful neighbourhoods. Every reader or business contribution, however big or small, is invaluable in helping the costs of running the website and the time invested in the research and writing of the articles published. Support Leytonstoner here for less than the price of a coffee and it only takes a minute. Thank you.