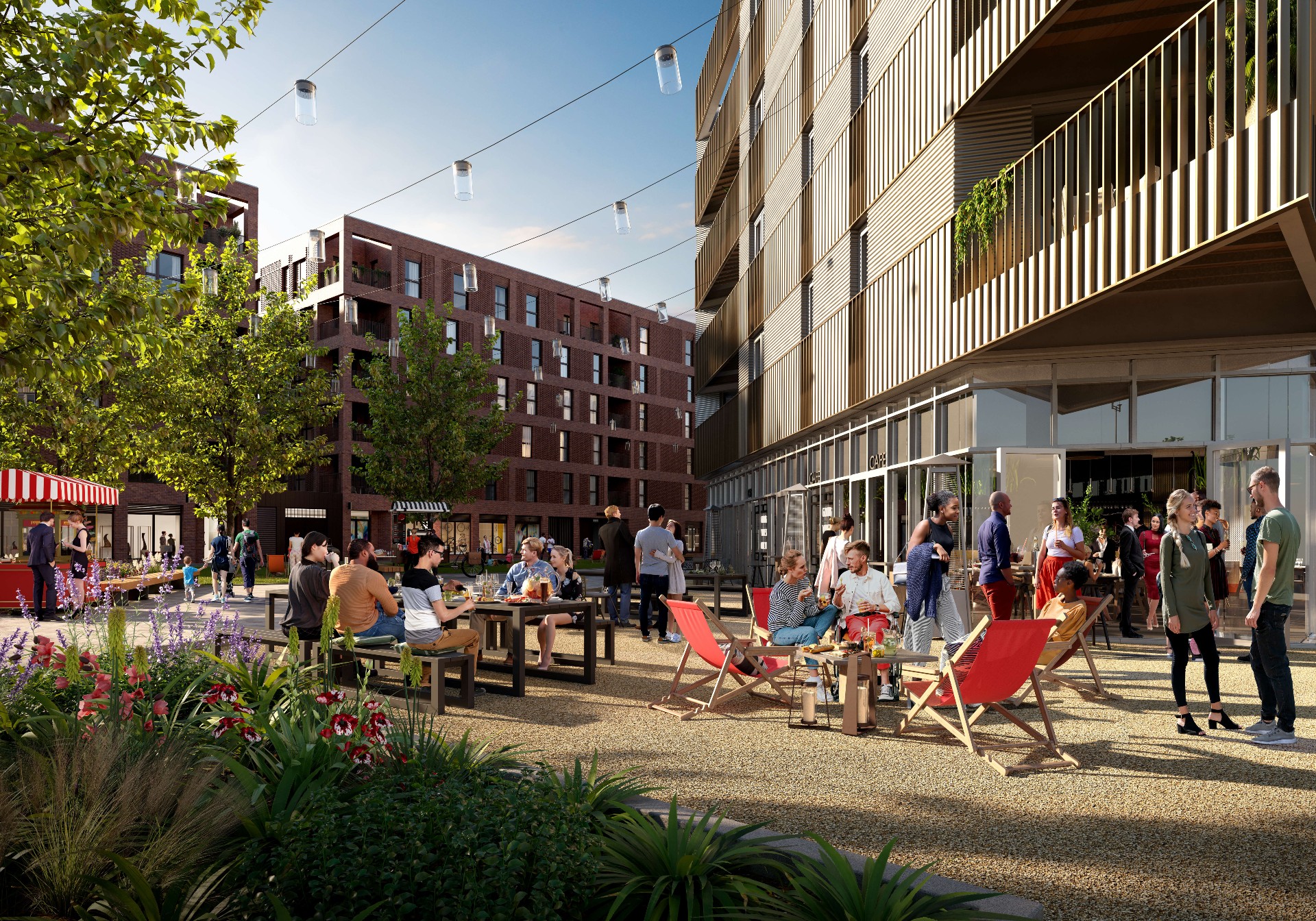 Over the last year, during our regular daily walks, it’s no overstatement to say we’ve grown to love the wider area. It sometimes feels like we know every park and tree within a three-mile radius, from, say, Bushwood to Leyton Marsh, or Wanstead Flats down to the sweeping expanses of the Queen Elizabeth Olympic Park.

You probably do, too. And it’s almost certain that you’ll have crossed the River Lea and marvelled at the Queen Elizabeth Olympic Park’s newest baby, East Wick and Sweetwater, on its western edge. It’s actually one of the nearest new neighbourhoods to Leyton and Leytonstone – and a mere hop from Eton Manor, the park’s easy access corner for many E10 and E11 locals.

What you may not know is that the intriguing double name has its own story: East Wick was originally suggested through a competition to name new areas of the park, with a local resident putting it forward as an eastern extension of Hackney Wick. Meanwhile, the name ‘Sweetwater’ references the area’s former Clarnico sweets factory, along with the many meandering waterways and canals.

The distinctive name, with its combination of old and new, crystallises the ethos of this leafy new district that will bridge the communities of Hackney Wick, Fish Island and Stratford. It will eventually comprise 1,800 homes, shops, flexible workspaces, schools and community spaces – all coming to life right now. Every home includes individual balconies or terraces, with communal courtyards and play areas. Not to mention, of course, the vast green swathes beyond.

If East Wick and Sweetwater appeals, but you’re worried it’s completely out of your financial reach, think again: this community wants to attract people from all walks of life, whatever their age, to live in one of the capital’s most buzzing locations.

With that in mind, genuinely affordable homes will be provided via social rent, affordable rent and shared ownership, alongside quality privately rented apartments, market sale apartments and larger townhouse-style homes, perfect for those wishing to settle and grow in the area. One single team from East Wick and Sweetwater will handle all tenants, both residential and retail.

One of the most exciting factors, culturally speaking, is you’ll be rubbing shoulders with what will be – drum roll – the new V&A Collection, and research centre, at neighbouring Here East. Once finished it will be home to a whopping 250,000 objects and 1000 archives, all displayed in an immersive cabinet of curiosities.

Which brings us to the V&A’s other stronghold in the postcode: less than ten minutes’ walk away over the park, East Bank itself is the new riverside powerhouse of culture, education, innovation and growth. With a clutch of world-renowned venues, its centrepieces will be the V&A Museum, Sadler’s Wells, the BBC and University College London. Imagine the buzz of ten thousand students, not to mention thousands of visitors a day, all giving a £1.5 billion economic boost to the area. We literally can’t wait.

As you’ve probably gathered by now, East Wick and Sweetwater is about different kinds of people coming together and enjoying living, visiting and working here. At street level you can expect a vibrant mix of restaurants, cafes, yoga and fitness studios, independent stores, shops and street food stalls in the daytime. Like the best areas across the capital, it’s for anyone and everyone to enjoy.

Curious? We reckon the best thing to do is, on the next sunny Saturday, grab a brew at Clarnico Club (see below) and take a stroll around East London’s next essential neighbourhood.

One to try: Clarnico Club

Cafes are starting to appear around the East Wick and Sweetwater area, including nearby Saint Espresso and the tiny Roasting Shed. With its pink neon signage, new arrival Clarnico Club enjoys a singular position directly facing the green expanses of the park. A stylish café, bar and social hub with bare bulbs, curving mustard banquettes and, when it can reopen properly, a 70-cover space, it will serve as the beating heart of East Wick and Sweetwater. With a terrace that enjoys the morning sun, here you’ll be able to learn more about the area, what’s taking place locally, or simply work flexibly (from May 17th).

One to try: Hackney Bridge

Did you know the whole E20 area is one of London’s six Creative Enterprise Zones? East Wick and Sweetwater believe it’s super important to maintain and support this longstanding community, and have therefore partnered with Make Shift (the makers of Pop Brixton and Peckham Levels) to create Hackney Bridge, a new canalside destination featuring workspaces, public facilities, events, markets, restaurants and bars. It’s the ideal venue for entrepreneurs to kickstart ideas, with the opportunity scale up to one of the larger commercial spaces available at East Wick and Sweetwater and neighbouring Here East. Read more about Hackney Bridge in our recent feature here.

Are you curious to live in, or find out more about, East Wick and Sweetwater? For more information visit eastwickandsweetwater.co.uk or call 020 3369 0573.

The nearest stations are Hackney Wick (Overground), Stratford and Stratford International (tube and train), with 10 minutes from St Pancras and less than an hour from London airports. The park also has walking and cycling trails, bus routes, and it’s 20 minutes from the M25.

This is a sponsored post in association with East Wick & Sweetwater. If you’re a business who would like to work on a similar article with us to promote a new event, venue, development, offer or product, please email info@leytonstoner.london