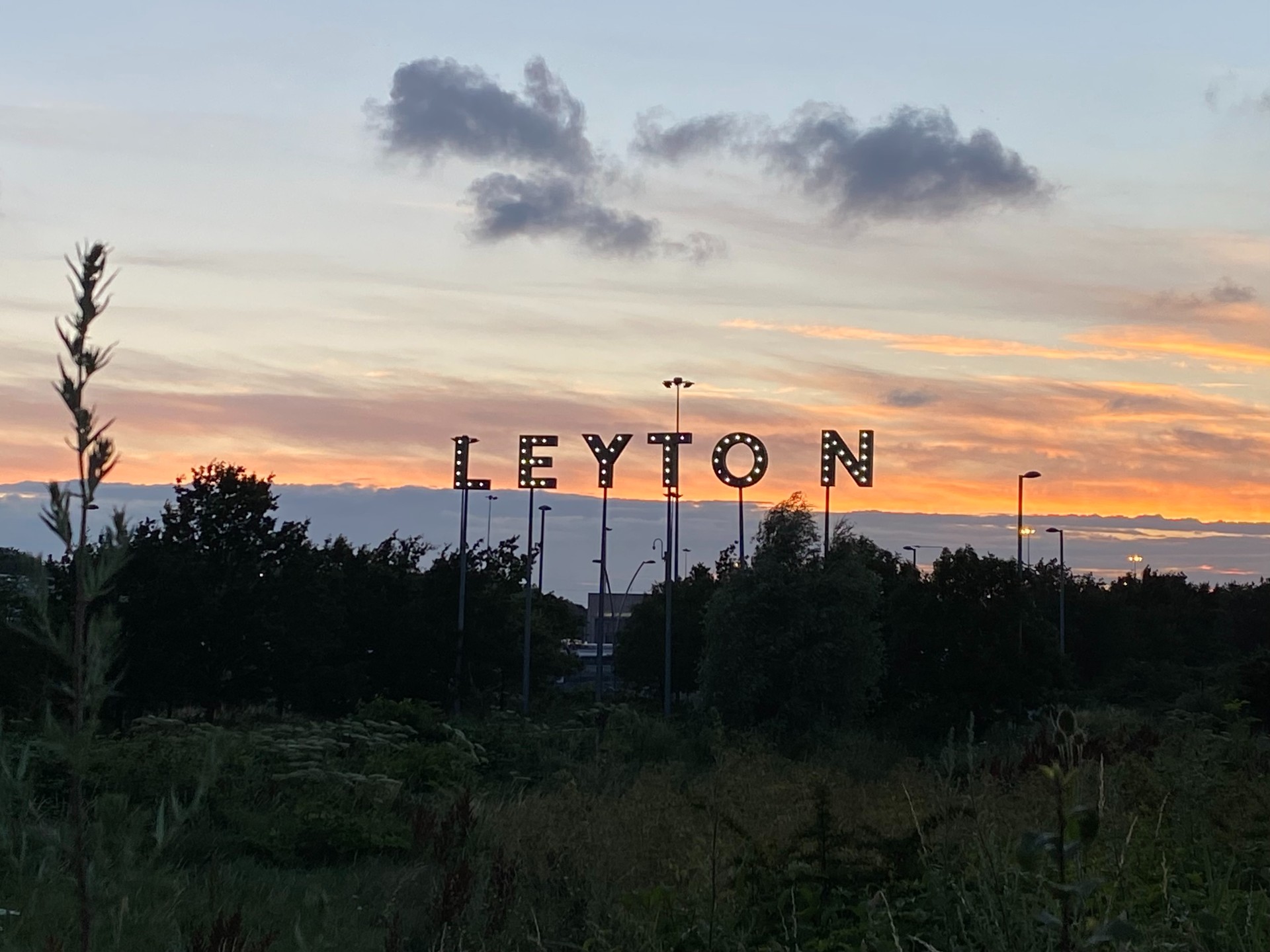 A few years ago, my journalist friend Jude Rogers had a brilliant idea: a fanzine for London. We came from a world of music fanzines – hand-stapled paeans to bands the mainstream shunned – so why not create something similar for our city: celebrate places the tourists – and many Londoners – didn’t even know existed? The result was sixteen issues of Smoke: a London Peculiar, what some have called a cult project in its heyday (yep, the noughties).

Unchartered Streets picks up (belatedly) where Smoke left off, singing the praises of London’s unsung suburbs in a series of book-length walks. Starting, of course, with a stroll around Leyton. Each book contains 92 colour pages with plenty of photos and maps. The walk itself is roughly six miles long, so a couple of hours plus stops for beer and buns and pointing at things. It’s also circular, so you can join at any point, with no annoying step-retracing.

The walk starts at the tube station, because that’s where Leyton started – the Leyton we know today. Before the trains came, everything was just forest and farms and the odd manor house.

One of those manor houses, Ruckholt, is buried under ASDA’s car park at Leyton Mills, and the manor itself sprawled as far as that mysterious dip in the High Road by Coronation Gardens – or not so mysterious if you know that this is where the Phillebrook once flowed on its way from Whipps Cross to the Lea. In early Georgian times, they dammed the river to create an artificial lake half as big again as the current gardens. Later, watercress was grown.

The Phillebrook got buried when the houses came, but the walk follows it upstream through Sidmouth Park to Francis Road before turning left (where, unbelievably, a windmill once stood) and heading down past the shops and the old police station (with its bas-reliefs illustrating the history of policing) to Walnut Tree House, Leyton’s oldest building.

That’s all in the first fifteen pages, we’re barely a sixth of the way round…and I didn’t even mention the two side-by-side town halls or the old dance hall in Coronation Gardens which, in the 60s, played host to countless bands – though not the big ones like the Beatles and the Stones (they played up the road at Leyton Baths, silly). Which is something to muse on, when you’re shopping in the Tesco’s that now occupies the site.

Why begin the series with Leyton? Because it’s where I began. My family’s from Bethnal Green, but I grew up in Leytonstone in the 1970s and 1980s, went to school in Leyton and spent too many Friday mornings shivering in shorts as Ive Farm’s muddy mosaic of lumpy pitches resounded to the thud and clang of trucks being shunted in the Temple Mills marshalling yard.

I left Leyton in the 80s and those bleak towers have gone now too, along with the sky-blotting blocks of the Beaumont Estate that brutalised the Bakers Arms skyline back in the days when Francis Road had a newsagents, an offie and a man in a dun coat selling paraffin – not buggy-friendly artisan cafes, a viennoiserie, a record store and a bookshop.

I’m not sure it would’ve added anything to triple-period games if I’d known that the pitches at Ive Farm were marked out on grassed-over rubble from the war. Or that Temple Mills was once the biggest goods yard in the UK, with eighty-odd tracks funnelling under Ruckholt Road close to where those giant wooden letters on sticks now spell out L-E-Y-T-O-N (see main pic, above). But I’m glad I know now.

I also know now, which I didn’t for ages (despite many long walks across the Marshes to watch the Orient) that those letters are birdboxes. They popped up in 2012, Olympic Year, along with that stylised medal podium on the bridge. And that wall-sized painted warning that you’re 574m away from…what? The Palmeira, for a Sagres and a pastel de nata? I really don’t know. I also don’t know why there are giant wooden balls on sticks in Marsh Lane Fields. What is it with Leyton and giant wooden things on sticks?

The series title, Unchartered Streets, riffs on Blake, whose poem London bemoaned how everything in his city had become “charter’d” – regulated, restricted, ordered. Well, maybe in Zone 1, but… Leyton? Nah, Leyton – like East London generally – has always just done its own thing.

Want to brew beer in a railway arch while next door a man in welding goggles does something inexplicable to a Twingo? Oh, go on then. Want to reinvent yourself as a pavement cafe, just because there’s a pandemic? Sure, I think there’s a couple of chairs in the alley. Want to sit there with a beer and read about somewhere you thought you knew? Well…now you can, as my Leyton book is handily stocked at the aforementioned Phlox on Francis.

Unchartered Streets: Leyton is £10 from www.uncharteredstreets.co.uk or from Phlox, Francis Road and other local bookshops.