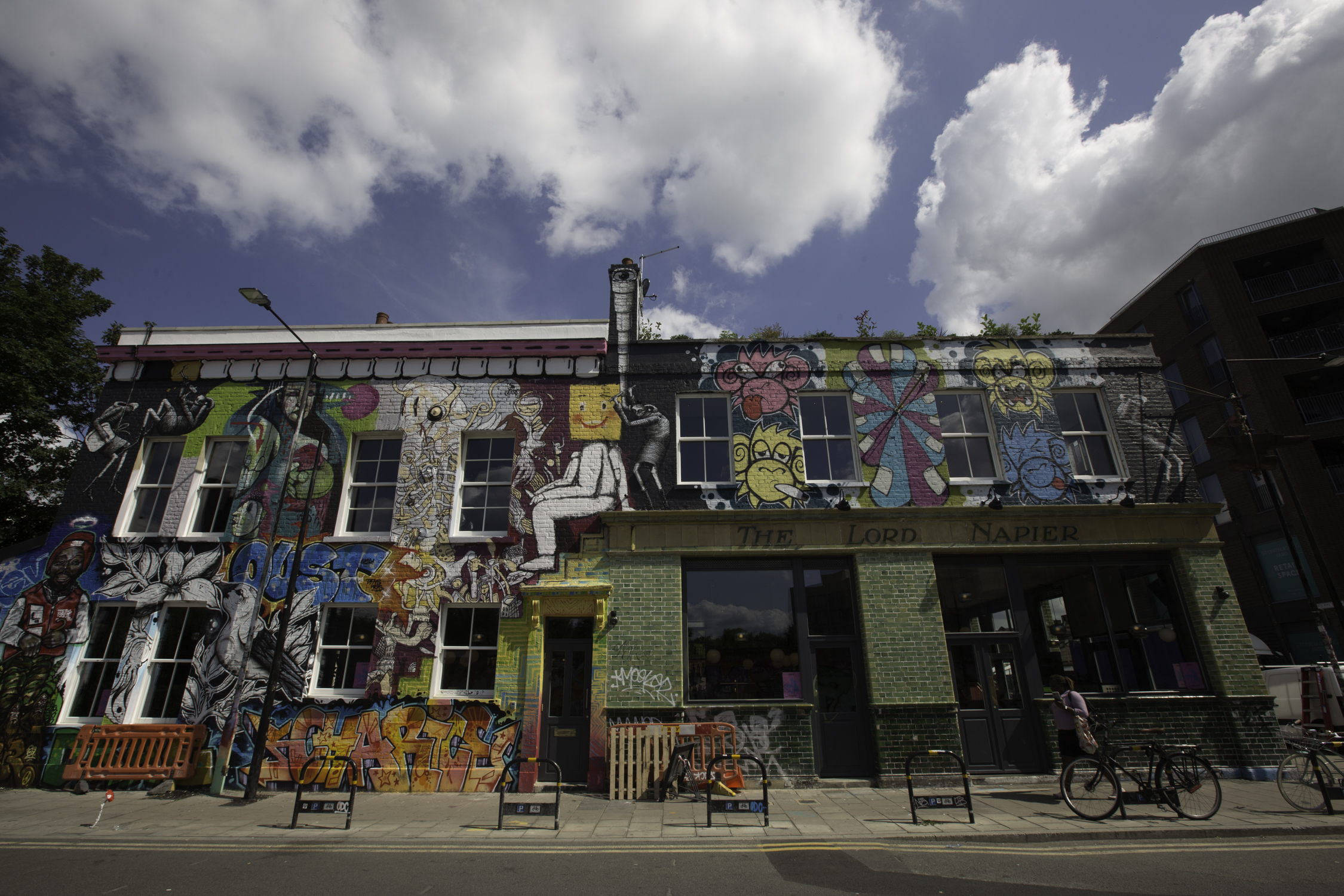 It’s the graffitied Hackney Wick landmark that almost every East Londoner has walked past at least once.

You might, in fact, have even pondered its past, which dates back to 1868 when it opened as a proper East End boozer named after a noble Scottish clan.

But did you know that it’s been twenty-six years since the last legal pint was poured at the Lord Napier? Since then, it’s been home to squatters and illegal raves, as well as some infamous graffiti (more of which, later).

The good news for fans of popular E10 and E11 pubs the Leyton Star and Heathcote & Star is that, now open as the revamped Lord Napier Star, it’s part of the high-quality Electric Star Pub family, which began way back with the Star of Bethnal Green. Their USP? “Every pub is built from the ground up,” says founder Rob Star, “to suit its location and local community.”

The biggest surprise on our impromptu first visit, on one of those balmy September heatwave evenings, was climbing up to the beautifully lit roof terrace at nightfall, and ogling the moody, panoramic views across Hackney Wick. It’s a fresh perspective you don’t see from the many taprooms and bars on the waterfront.

On a second, daylight visit, the view proved equally absorbing, offering a sunset peek at Victoria Park over towards the west, and the tower blocks of Stratford and the ArcelorMittal Orbit east (pictured below).

Meanwhile, back downstairs, the airy ground-floor pub is all elegant floor tiling and globe lighting, while, on colder evenings, you can squirrel yourself away in comfy booths and cosy, socially distanced banquettes.

Make sure you also discover the secret rear courtyard garden with its covered seating and Mediterranean plants: in fact, this is one of those unique pubs you can properly explore.

Two first floor dining rooms, with loungey eclectic blue and gold seating, are also perfect to catch the evening sun with a glass of wine, and something of an oasis if the ground-floor pub is too busy. These rooms can also be booked for private parties, meetings and other gatherings, the smaller of the two perfect for a family lunch or birthday.

With a license to open until midnight during the week and 1.30am on Fridays and Saturdays, music casts its welcome influence on the Lord Napier. There’s a ‘Pub Disco’ every Friday and Saturday nights featuring old-skool R&B, soul, funk, disco and good ol’ house classics. And 90s legends like A Guy Called Gerald have already played out to a packed house: coming up soon Theo Kotis and Lemmy Ashton (Bugged Out).

KraPow at the Lord Napier

Hungry? Food is skippered, as at E11’s Heathcote & Star, by East London collective KraPow, who serve up some zinger Northern Thai flavours (with eye-watering spices), based around punchier and much more complex notes from neighbouring countries Laos, Myanmar and China. Top tip? The ‘Son-in-Law’ eggs (pictured above), deep fried with the gooiest orange centres, with chilli, coriander and a rich tamarind sauce – so moreish you’ll be ordering another plate straight away.

Others we recommend are the deeply golden fried cauliflower florets with chill; Thai style pork bites (pictured below), their fatty belly crunchy and yet tender in a Thai basil sauce; and a refreshingly fiery Tam Taeng Kwaa, a smacked cucumber salad with vermicelli, dried shrimp and the crunch of peanuts. Yum.

There are also half a dozen signature mains you may recognise from the Heathcote, such as the Krapow stir fry, Drunken Noodles and the super tender chicken thigh burger in brioche with Asian slaw.

Thirsty? The drinks menu contain all the usual London craft (and beyond) beers – including our faves like Peckham and Pressure Drop – as well as classic cocktails alongside an extensive spirit and wine list.

And so back to the famous outside graffiti, which has been updated while retaining what Rob calls “a strong connection with its roots”, with a team of established local artists headed up by Teddy Baden, one of the original crew. “We’re proud to be a part of the ever-changing face of Hackney Wick,” Rob says, with striking new murals painted inside the pub as well as on its exterior.

“I’m really excited to finally get the doors open at The Napier,” he says, smiling. “I’ve spent the last six years trying to re-open this historic building, so pouring that first pint and drinking it on the sun-soaked roof terrace felt extra special.”

Visit at sunset and you’ll understand exactly what he means.

This is a sponsored post in association with the Lord Napier Star. If you’re a business wanting to access tens of thousands of Londoners across our Weekly north and east London newsletters, websites and social media network, please email info@leytonstoner.london or info@londonbelongstome.com.

Yes, that's fine
No, thanks
Let me choose