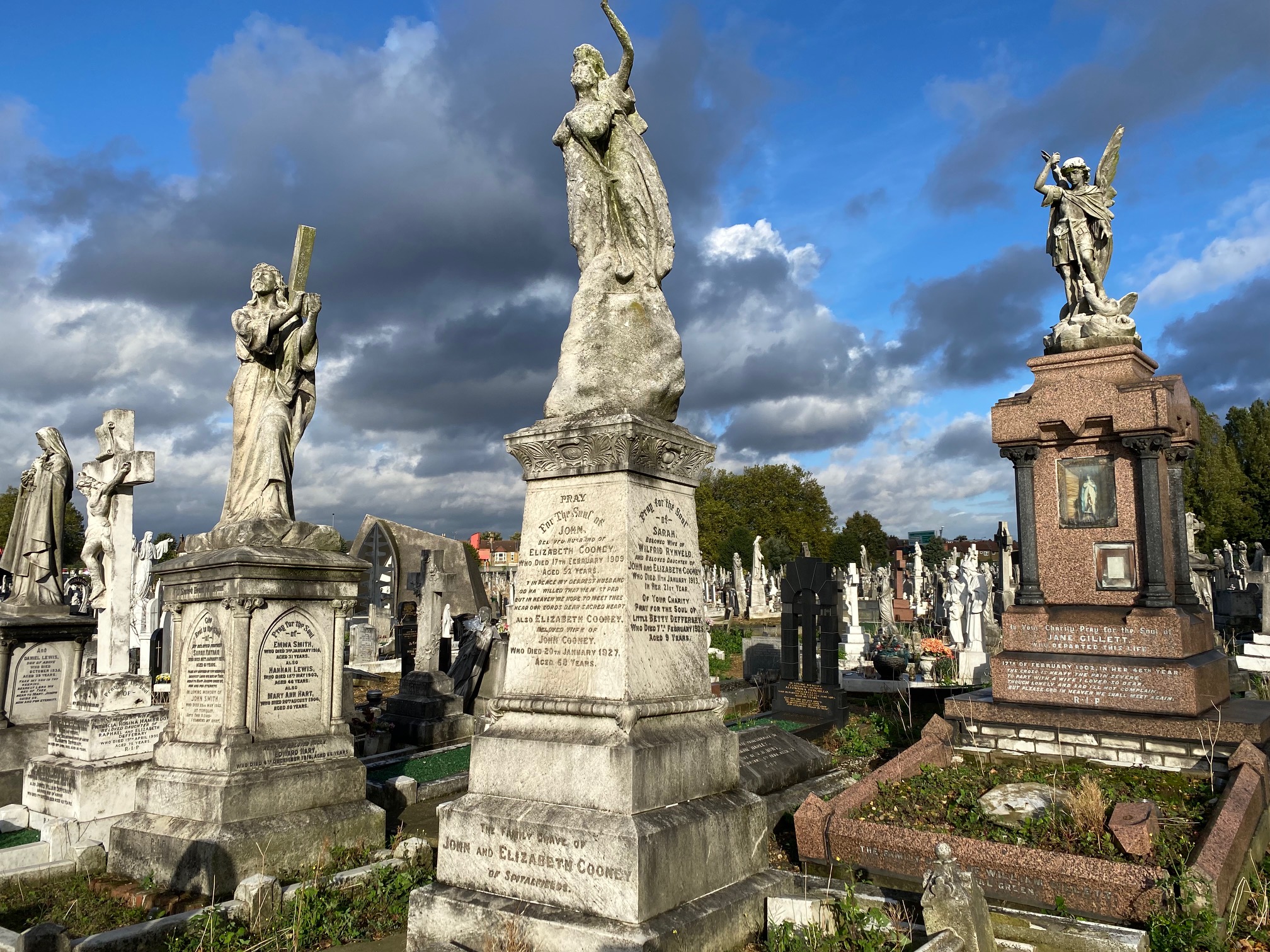 The late October rain is lashing as I crouch down to study the faded gravestone of Mary Jeanette Kelly, the fifth and final of Jack The Ripper’s victims.

Buried on 19th November 1888, without a family to pay for a headstone, her unmarked grave and the exact location of her burial remains unknown in St Patrick’s Catholic Cemetery, a few minutes’ walk from Leyton tube.

The tribute I’m looking at, with its rather sorry damp pile of plastic flowers, painted stones and other debris, was arranged by Leyton resident John Morrison in 1986, although its location in the graveyard has since been declared incorrect (to find the exact one would entail digging up 400 bodies, apparently).

Just 25-years-old when she was murdered, Mary Kelly was also the youngest of the confirmed Jack the Ripper’s victims (read more about her tragic story here). The headstone, above, inaccurate location or not, is relatively easy to find, by following the main path round the church to the right, then turning left in an easterly direction. When you see a rubbish bin, stop and look up: just behind a white statue of footballer David John Welley is the spot, its powerful inscription almost unreadable:

“In Loving Memory of Marie Jeanette Kelly: None but the lonely hearts can know my sadness. Love lives forever.”

St Patrick’s position, aligning the railway tracks between Leyton and Leytonstone stations, feels unique, with the roar of the A12 as constant as the regular chug of the tube trains.

Opened in 1868 to help cope with the increase in the local population, a century later the cemetery had already recorded a whopping 170,000 burials. In fact, it’s so vast that huge areas are sparse wasteland, their graves broken and desolate, while others are pleasingly grassy mounds, with gleaming new headstones.

On the course of two visits this week, first in the sultry low-light of a grey afternoon, the second with the autumnal weather as wild as the moors, I wandered round the maze of crumbling statues, leaning crosses, tilted headstones, surprisingly quirky mausoleums and dilapidated jam-packed graves, poring over Victorian names and dates. Just occasionally, the sun occasionally peaked out through the duvet of cloud.

Taking shelter from a sudden downpour in the porch, I pondered why this cemetery isn’t better known, as its atmosphere is so distinctive; it’s certainly unlike any of its other more famous siblings, from the extremely manicured City Of London Cemetery in nearby Aldersbrook to the wild, overgrown oases of Abney Park, Nunhead and, of course, Highgate.

And it’s worth adding that there are other notable memorials heref, too. These include Bantamweight boxing champion Walter James Croot, Last Of The Summer Wine actor Stephen Lewis, and several of legendary local director Alfred Hitchcock’s immediate family (see below), including parents, uncle and cousin (also both called Alfred).

These last graves are especially easy to find, being off the main path, curving right just near the church.

A final tip, should you venture over to Langthorne Road this weekend: hike right up to the furthest north-eastern tip, where you’ll be rewarded with windswept views back over East London and the tower blocks of Stratford, as well as a fascinating section devoted to several hundred Polish graves. The more you explore, in fact, the more fascinating this place is for quiet reflection, Hallowe’en weekend or not.