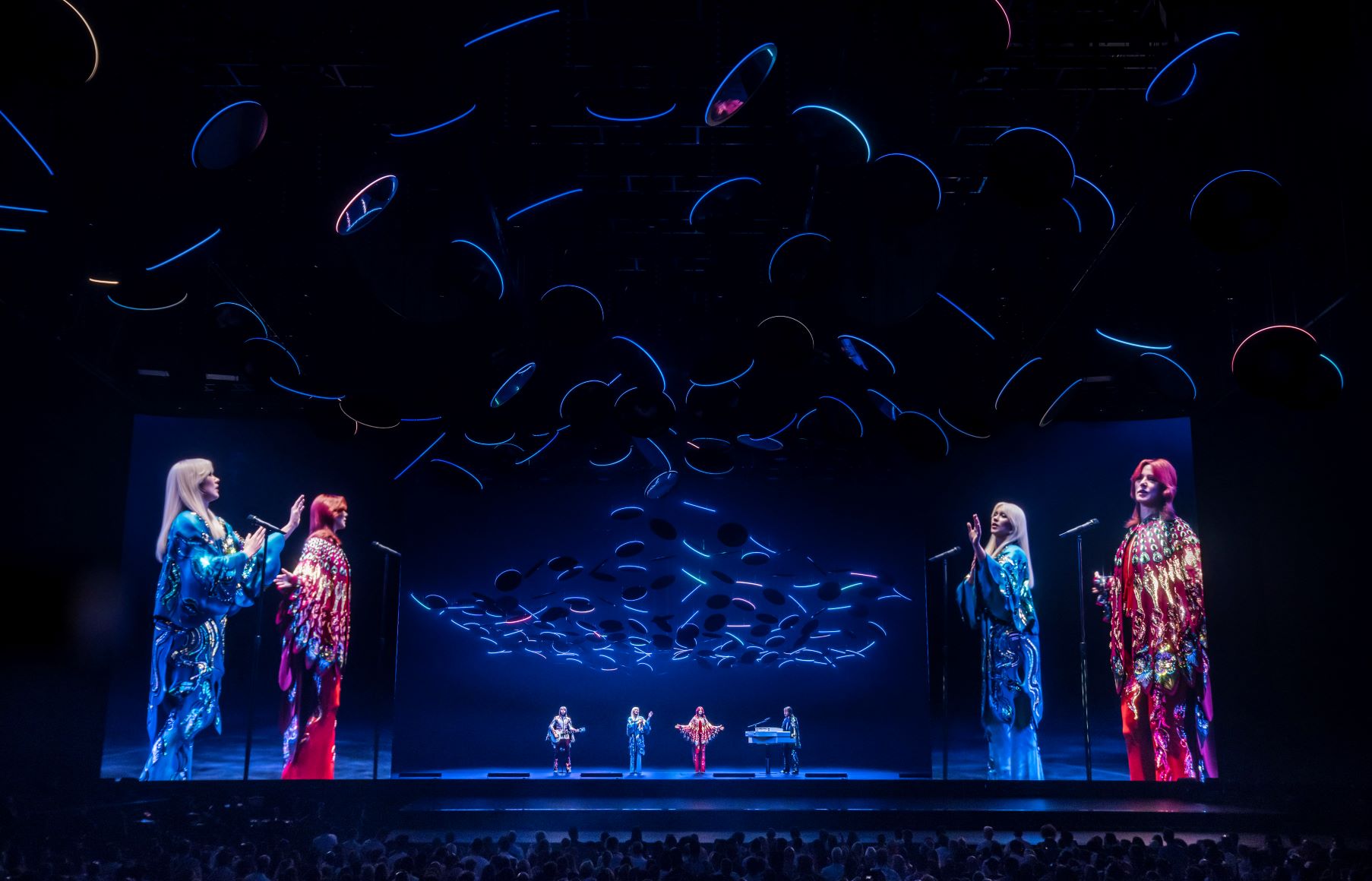 What is it? Located on the southwestern edge of the Queen Elizabeth Olympic Park, this ultra-modern arena has been purpose-built for what must surely be 2022’s most hyped concert. The setlist comprises ABBA’s biggest, most popular hits – but also a good dose of lesser-known tracks that show that, even in their mid-70s, the band is admirably still striving to create something fresh.

How does it work? Digital versions of Agnetha, Björn, Benny and Anni-Frid appear on stage, backed by a ten-strong live band (of real people), the idea to “blur the lines between the physical and digital”. Not in fact holograms, they are 3D avatars displayed on a flat screen, created following months of motion-capture and performance techniques by George Lucas’ company Industrial Light & Magic. And the whole production really will blow your mind: these are playful and clever interpretations of songs that could easily sound tired or clichéd.

Talk us through it all. Getting into the arena was effortless on our Monday night visit this week, and, with a 3000-capacity (compared to 20k at the O2, for example) it’s actually smaller than you think. On arrival, the attention to detail is the first thing you notice, from the well-curated drinks list at the bar (even the wine glasses are classy) to the quality streetfood stalls and subtle lighting: it’s more Barbican than Wembley. And the buzz is palpable, the merch stall doing swift trade. We couldn’t resist an ABBA refillable water bottle, obvs.

So what’s the show like? It starts at 745pm – sharp! – and is all over by 915pm. So it’s quite simply a breath-taking 90-minute rollercoaster watched either from the auditorium or down on the dancefloor (we were in the former, the view flawless). The laser-and-lightshow alone is incredible, with 500 moving lights adding to the immersive feel, while the giant screens show action close-ups and facial expressions (and, of course, detail of the Dolce & Gabbana-designed outfits).

Is it convincing? It’s hard to believe the ‘band’ we’re watching performing on stage are not real humans, from the the jokey banter to the amusing anecdotes between songs – and even the odd lull as you might get at a real gig. Musically, there are too many bangers to mention, from a buoyant Mamma Mia to a laser-drenched Lay All Your Love On Me, as well as the disco-heaven of Gimme Gimme Gimme and majesty of Fernando. The group’s unrivalled masterpiece Winner Takes It All comes exactly where you think it will – and yet retains its ever-powerful punch.

Any surprises? Some of the classics are reinvented with stunning visuals: Voulez Vous is a memorable highlight, with a captivating Manga film echoing its urgent throb (an animation treatment also accompanies low-key 1977 hit Eagle), while Waterloo is presented wittily, firmly preserving it in aspic.  Opening track The Visitors is an underrated classic, while elsewhere the mournful Chiquitita is sung against a spellbinding sunset. I also enjoyed Does Your Mother Know performed – even its vocals – entirely by the young band live on stage, evidently loving their own moment in the spotlight. Recent hits I Still Have Faith in You and Don’t Shut Me Down prove there’s still early 1980s brilliance in their new material.

Phew. So how do you get there? If you live in in any location around the Olympic Park, from Leyton to Homerton, Stratford to Hackney Wick, it’s a pleasant stroll. Or hop off at Pudding Mill Lane DLR  or Stratford.

The verdict: A fantastic night out: unlike anything else you’ll see this year. Filing out into the clear night for a post-show snifter, we wondered who will be the next big star to do it – surely Madonna must be closely monitoring its success.

ABBA Voyage is at ABBA Arena, Pudding Mill Lane, London E15 2PJ now booking until 28th May 2023 with more dates to be released soon. For all information go to abbavoyage.com.