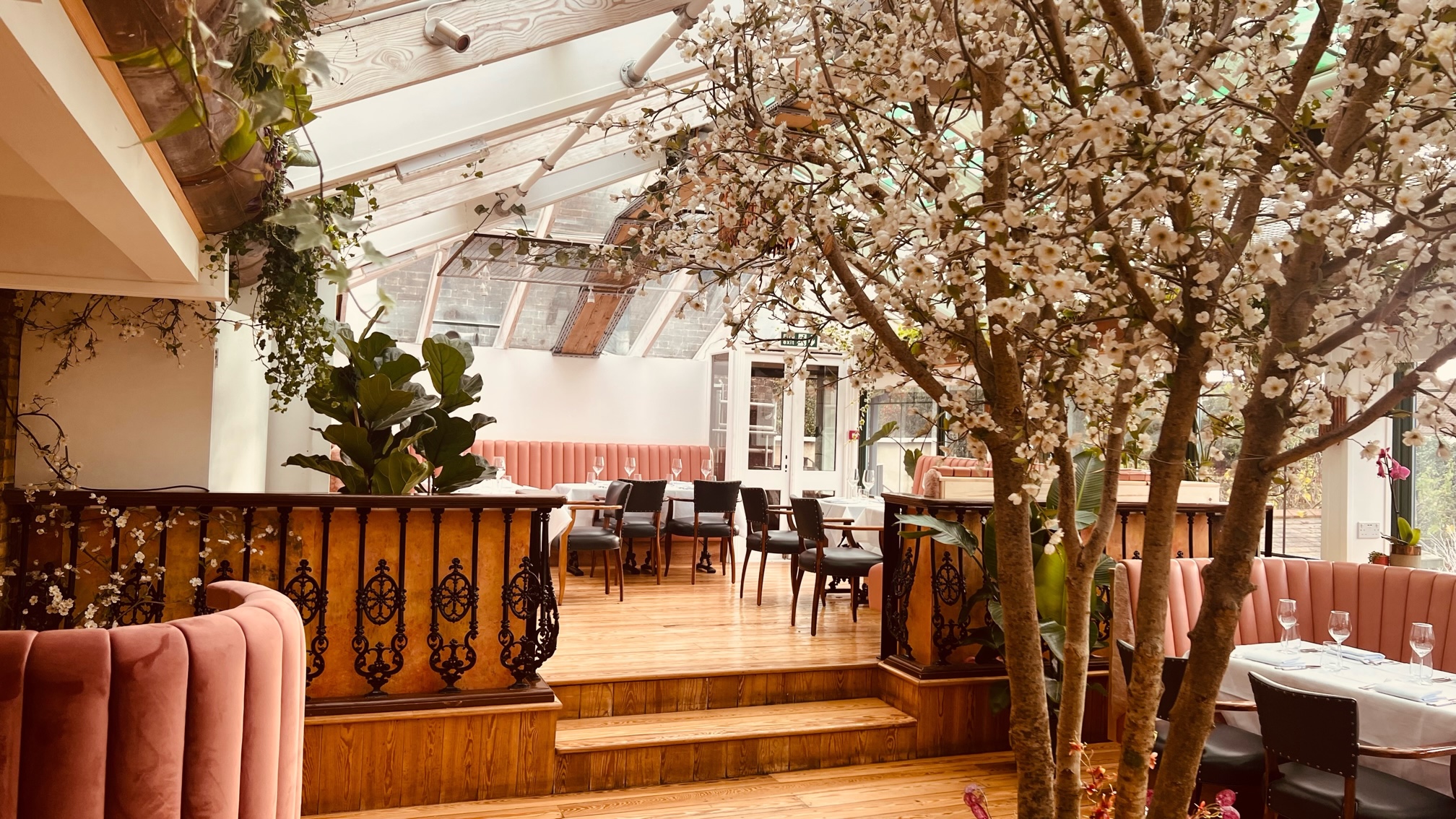 Unbelievably, it’s already 18 months since we first heard that Ruth Tulip and her business partner Will Cabral, both key figures at the original Ivy restaurant on West Street WC2, had just taken over E11’s best located watering hole and hotel.

Prior to this, the Sir Alfred Hitchcock, which opened in 1981 (a year after the legendary director died), was somehow never an essential stop for a drink, despite its prime Hollow Ponds position and cosily wood-panelled interior.

Fast forward to 2022 and renovation work has been in full throttle for much of the past year. The terrace is now a huge, reworked space called The Pleasure Garden (above) with bijou outside cocktail bar, benches and two covered outdoor event spaces, both of which can be hired for special occasions (seating 30 and 46 people respectively). Manicured globe-shaped hedges line the perimeter.

Inside the actual venue, Ruth and Will have created Alfred’s Bar (above), with its cosy, atmospheric interior, all teal panelling, bare brick and original wooden boards and fireplace. A favourite spot is to pull up a bar stool at the long counter (see below) and sit there, tinkling a cocktail.

Incidentally – and before we tour the new dining room – these bespoke libations are a real focus. The drinks list references classic Hitchcock movies: negroni lovers should order a Dial M For Murder (the gin replaced by Mezcal), while a Leading Lady (the director’s fave cocktail) is a frothy gin sour with a floral note or two. And as for the Espresso Martini? As balanced as the legendary Dick Bradsell original.

But right now, however, we’re all about the launch of The Rear Window Restaurant, pictured below, named, of course, after the classic 1954 film starring James Stewart and Grace Kelly.

And – drum roll – it finally opened last weekend. “It’s such a relief,” says Will, with a huge smile, as we tour the room on a wet Sunday lunchtime. “The seating majors on comfortable banquettes. And as it’s glass-roofed, it has a lovely feel of being an atrium-style open-plan space. The vintage peach colour contrasts the cobalt blue chairs, and many of the bespoke features in the room have been sourced, upcycled and re-imagined. We’re all about giving the ordinary a new lease of life.”

We gawp at the lovely cherry blossom tree right in the middle of the room, and Will points out the rusty grids floating above with plants in copper pots just trailing all the way down. “Soon,” he adds, “there’ll also be a little cocktail bar in the centre of the room, too.”

At the far end don’t miss the wittily irreverent large-scale painting of a poodle by local artist Matt King, whose work has appeared at The Saatchi gallery, as well as in Vogue, Tatler and Vanity Fair.

And so to the food. As with the drinks, the quality of the menus reflects the whole team’s previous work at The Ivy. Ruth and Will met at the West Street original restaurant back in the mid noughties (ask them for a celeb story or six), but have also worked with Hix and Roka/ Zuma group respectively.  Head Chef Nerijus Rackauskas, who has spent over five years honing his craft at The Ivy, now brings his innovative flair and vision to the space.

Their seasonal menu (note: there’s a separate vegan/vegetarian menu too) boasts everything from classics like tuna ceviche and steak tartare to pan-fried hake with crispy capers and beurre blanc, or pork belly with pumpkin puree and hispi cabbage. Desserts include apple tarte tatin, knickerbocker glory or selection of home-made ice creams.

A good way to try the food if you’ve not yet eaten here before is the new set lunch menu: it’s £19.95 for two courses, or £24.95 for three, and available Wednesdays to Fridays only.

Highlights might include a Scotch egg, all creamy orange yolk and tender Cumberland sausage, or truffle caesar salad with indulgent garlic dressing and parmesan shavings. A surprise hit on our last visit was the grilled miso cabbage salad, topped with crispy onions and packed with pine nuts, chilli, spring onions, sesame seeds. A total flavourbomb.

Another plant-based must is slow-baked miso aubergine (above), almost steak-like in appearance, and unctuous when sliced, topped with cauliflower, red onion and herb tabbouleh in a pool of nutty romesco sauce. And for the carnivorous it has to be the onglet, above, served medium rare, with moreish skinny chips. (Note: the seasonal menu is subject to change).

And finally, now the restaurant is fully open, the whole place will come into its own with boozy Sunday lunches, weekend DJs, festive parties, LGBTQ nights and more as autumn moves into winter.

In short, the ambition and sheer scale of the team’s vision for The Rear Window is a brilliant asset to the increasingly buzzy food scene in Leyton and Leytonstone. And just wait until you venture down to the refurbed toilets.

The Rear Window Restaurant and Alfreds Bar is in residence at The Hitchcock Hotel, 147 Whipps Cross Road E11. The midweek set lunches at £19.95 and £24.95 for two or three courses run 12midday – 4pm, Wed-Fri only. Find out more and book a table via their website here and follow @therearwindowrestaurant

This is a sponsored post in association with The Rear Window. If you’re a North or East London business wanting to access tens of thousands of Londoners across our north and east London newsletters, websites and social media network, please email info@leytonstoner.london or info@londonbelongstome.com