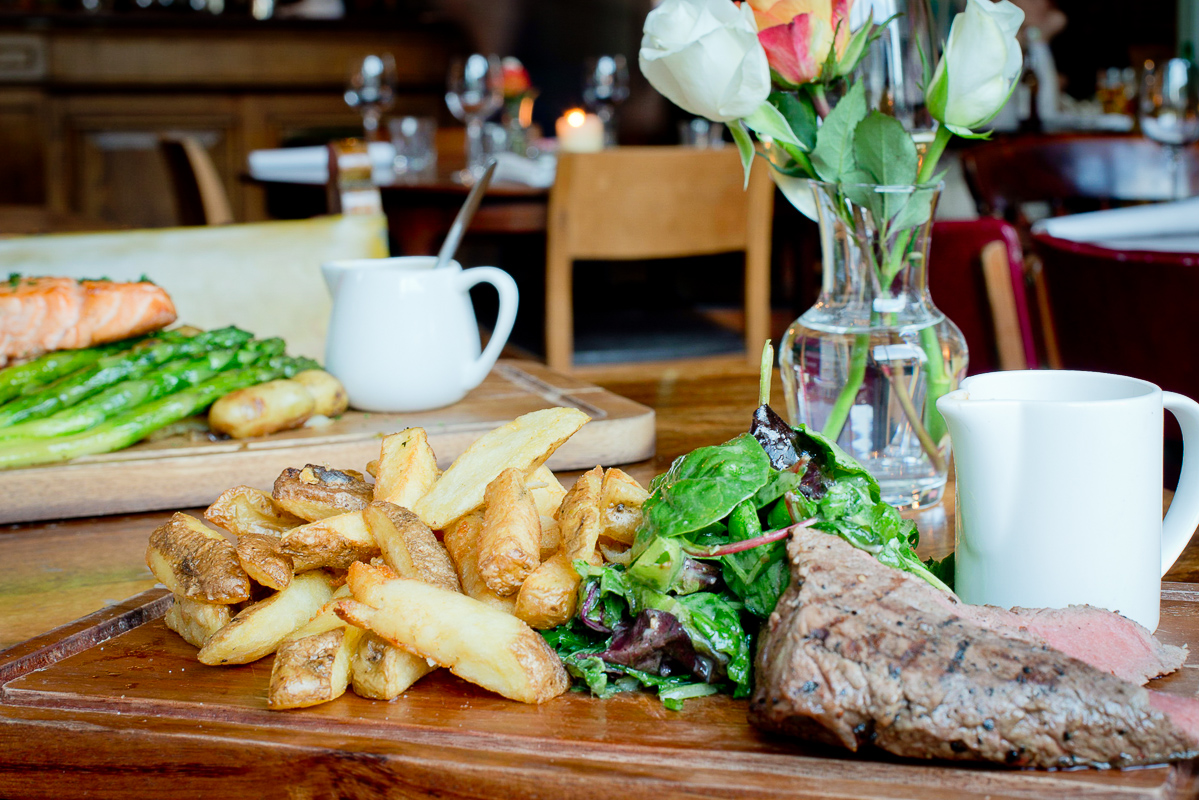 We never went to Zulu’s, the bar that previously occupied this space back in 2011 but, since its metamorphosis into the Red Lion, we’ve made the pilgrimage on a regular basis.

The interior is somehow so easy to relax in, all bare brick, exposed floorboards, mismatched furniture and panelling. Cosy winter evening meals in the main bar? Tick. Sunny summer afternoon drinks in the huge outdoor space out the back? Bring ’em on.

But for some reason we’d never tried Sunday lunch. Until the other weekend, that is (now we’re regretting all those Sundays wasted anywhere else).

On the advice of a waitress who proved exactly the right side of attentive, we started with creamy wild mushrooms and baby spinach on toasted focaccia. And it was so, so good: on a normal lunch, it would probably have kept us going until dinner time – except that rules don’t apply when there are a mouthwatering five different roasts to choose from.

After much dithering – the pulled lamb joint with mint gravy for two to share was particularly enticing – we plumped for the Welsh rump of beef, which came with a Yorkshire pudding, and the free range half chicken, which didn’t. (We added one because I’m from Yorkshire, where we don’t consider a roast to be a roast without it.) And there was plenty of sage and onion stuffing and bread sauce to compensate too, with both plates piled high with tatties, swede and carrot mash, savoy cabbage and baby parsnips.

A recent midweek lunch visit suggested the food offering had been finessed since the pub’s early days. The mains listed on-trend items like hake with capers, and duck breast with sweet potato gratin, but we opted to share a few small plates instead.

There was a mistake with the corned beef hash and fried quail’s egg: the soft potato arrived meat-less and rather bland, but was quickly swapped for the correct (and highly tasty) version.

Smoked chicken and pork terrine was rich and textural, although the bacon unfurled and the dish was a tad cold; quince and apple chutney added the right acidic hit, however. Also spot on was side of green beans and shallots. But the best dish? Thin-sliced octopus with slow roast cherry tomatoes, new potatoes and tapenade: tender, rich, sharp and earthy in equal measures. Stephen Emms

I haven’t, of course, eaten Sunday lunch at every pub in east London but this must be a strong contender for one of the best. The breast was succulent and tender, the rump perfectly medium-rare, the veggies al dente, and the roast potatoes all-importantly crispy on the outside and soft and fluffy in the middle.

Even better, the the Yorkshires were as good as the ones my mum used to make – but four times the size. There was, in fact, so much gravy we didn’t have to ask for an extra jug as you often do. And we had zero room for dessert, despite a sticky toffee pudding winking at us on a nearby table.

We washed our food down with a couple of glasses of Cabernet Sauvignon (me) and a couple of pints of Firebrand IPA (him), an ale from Cornwall, just one of the many craft beers on offer at the bar.

The bar was packed with fellow diners all enjoying their lunch at salvaged tables of varying sizes, topped with vases filled with tulips of various colours. After a grey start to the day, the sun broke through, bathing our table, which was by the window, in sunlight: all in all it was one of those near-mythical Sundays you never want to end.