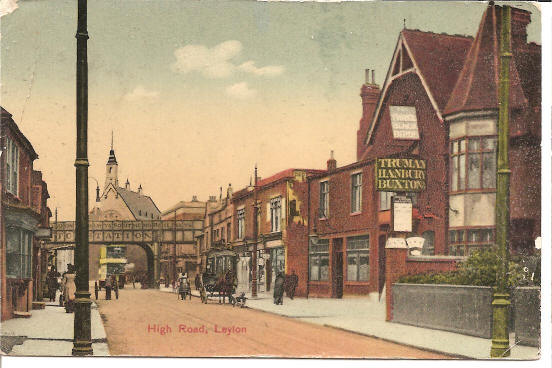 The old pubs of Leyton and Leytonstone: a stroll down memory lane

Which boozer barred his grandmother? Lifelong resident Alan Wells OBE recalls the watering holes, and misadventures, of his youth

First, a disclaimer: this personal recollection of Leytonstone and Leyton watering holes isn’t intended as any kind of history. Why? Because no-one’s memory is completely accurate.

Well, mine isn’t, anyway. But then I am nearly 75. Rewind to 1946 and I was born on leafy Kimberley Road in E11, before moving to the back of a shop on Leyton High Road. From about the age of six I grew up in a long forgotten prefab estate called Porter’s Field, where the riding stables is now, down at the end of Lea Bridge Road.

I’ve lived round here almost all of my life, except for a couple of brief forays to Birmingham and Clapham. For almost thirty years I was the Chief Executive of a National Education Agency, advising the government on literacy and numeracy, and was chuffed to get the OBE in 1994 for services to education.

But you don’t want to know about that. What’s much more interesting is how I’m in the privileged position to observe a lifetime of change. On my lockdown walks over the last twelve months I’ve passed places that bring back vivid memories from different parts of my life. Many are pubs, not because I’ve spent lots of time in them, but because they were – and still are – a hub for the local community.

Growing up in the 1950s, the dozens of local boozers were a haven; they were usually warmer and more comfortable than people’s own homes. It’s often said that pubs were only for men at that time. That might be right – but my various aunts never appeared to see it that way. And good for them.

Our first local was The Greyhound on Lea Bridge Road. The building is still there, although it hasn’t been open for over twenty years. I can’t actually ever remember going in as a kid because I was too young, so my memory is waiting outside while my mum, dad, aunts and uncles were all boozing inside. I recently walked past and suddenly thought about the last drink I had there with my dad, who died forty years ago this year. There was also a seafood stall outside – and I can still smell the pots of cockles and whelks beloved of my many aunts, a little tipsy a couple of drinks in.

Also on Lea Bridge Road is ancient hostelry the Hare and Hounds, which was revamped a year or two back. My dad used to take me and my brother to Leyton Football Club on a Sunday morning to watch amateur teams and he’d sometimes pop in there for a brown ale. I’ve been there once or twice since, because it has the Saffron Kitchen (the best authentic Punjabi food anywhere locally) just next door. The old football ground is now the restaurant’s car park.

I spent a bit of time as a teen drinking underage in both The Antelope, pictured above, and the Three Blackbirds on Leyton High Road (main pic, above, as it was in 1910). This was a huge place, although it had different bars and an outside toilet. The building dated back to 1878, although a hostelry had been there since 1705; it closed in 2006, and is now a Sainsbury’s Local. There’s no sign of the former pub.

Nearby were the Oliver Twist, which closed in 2005, and The Alma, converted in 2002, both on Church Road. You can still see the sign, in fact.

Over in E11, I was lucky enough to catch The Who, then called The High Numbers, in the room on the top of The Red Lion in Leytonstone High Road in the early 1960s. They only made one single as The High Numbers, ‘Zoot Suit’, which is worth a bit now on the rare singles market. (No, I don’t have a copy.)

After a mixed history in recent years it’s now back to its best as a local. It’s a busy place for families with young children. When I’ve been there in mid-afternoon it often seems like a rather nice nursery but with the added benefit of alcohol. It does tasty food as well (editor’s note: read the Leytonstoner’s first ever food review of its Sunday lunches, here).

Back in E10, my mum and dad often went to The Lion & Key in Leyton High Road, rumoured to be the oldest in Leyton (dating back to the late 16th century) – and now a hotel with a good bar. It was from here that my grandmother was barred at one time. She used to drink what she called ‘Red Biddy’ – or port – and probably had rather too much on a number of occasions. She died when I was about five, and had, thankfully, calmed down somewhat by then.

Others are also much improved. You needed a strong constitution to visit The Coach & Horses on Leyton High Road at one time, but now it’s a well restored local with quality food. Finally, a special mention for the William the Fourth close to the Baker’s Arms. I’ve not been there recently but it was well known for brewing its own beer, and was one of the few places locally that you could get a pint of Mild.

So what to conclude after three quarters of a century in the neighbourhood? I do look back with a certain amount of nostalgia, but I’m not someone who thinks everything was better when I was young. Frankly, it always seemed a grey life back then. The area has altered mainly for the good: people have moved in, and moved on, but it still buzzes with community, diversity and neighbourliness. I’ve always had the view that if a community has done well by you, you should stick with it.

And of course, for so long it was never very fashionable to live in Leyton and Leytonstone. Until recently, of course. That’s something that really has changed.

It’s our sixth birthday this year. But due to advertising revenues in freefall, we need your support more than ever so we can keep delivering ‘good-news’ cultural stories that celebrate our wonderful neighbourhood. Every reader contribution, however big or small, is invaluable in helping the costs of running the website and the time invested in the research and writing of the articles published. Support Leytonstoner here for less than the price of a coffee and it only takes a minute. Thank you.