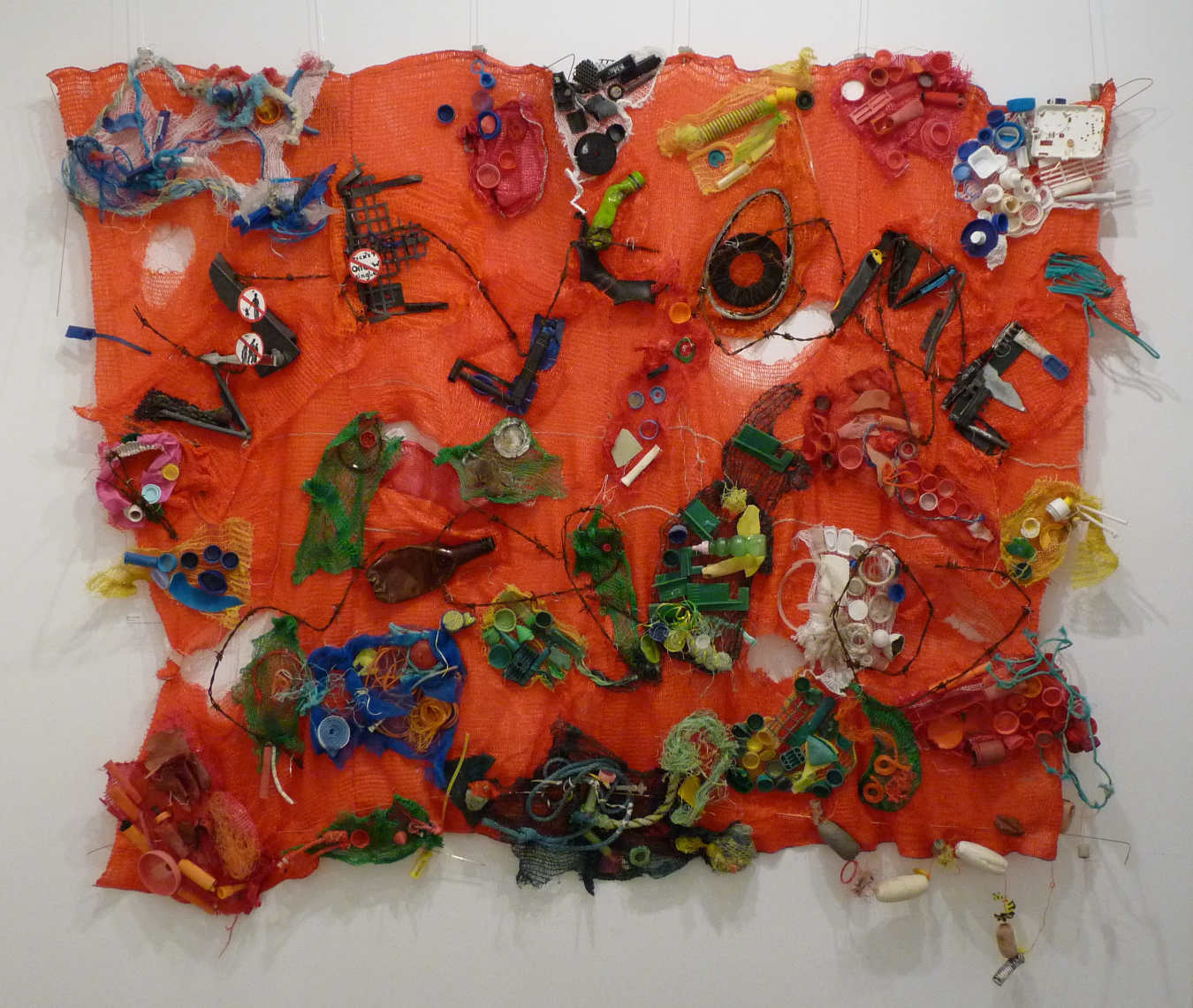 Non-one could accuse Mary Knight of being a blow-in. She’s lived in Leytonstone since the early 1970s, and her paintings have been on show in the Creative Bloc exhibition Incognito at the Stone Space in Church Lane.

Mary, an experimental artist, said she was originally drawn to Leytonstone because it was “by the Central Line, and all that lovely greenery with Hollow Ponds. Until not so long ago, herds of cows would hold up traffic on the Green Man roundabout and come down the side roads eating people’s front garden bushes.”

As readers know, there’s still something of that late Victorian rural atmosphere in pockets. “That was another reason that I liked the area, it was quirky – and still is.”

Mary’s art, though, is unlikely to focus on the rural or suburban idyll, though she loves sketching parts of it: “Trees, light, water: these are challenging, and terraced suburban brick houses in their rows have such variety. There are some wonderful front gardens on show too. People have just so much imagination.”


She produces modern sculpture, using less traditional materials to tell stories to make points, often about people on the edge, either literally or metaphorically, with, say, mental illness.

“Very often global travellers – for example, refugees – have serious forms of mental illness in response to what they have suffered, but there is always hope. I never want to eliminate a sense of hope and of vibrancy and aliveness in my work.

An inspiration also comes, in part, from Walthamstow Market and its traders. “Originally I sought out plastic sacking, the sort that surrounds large numbers of onions or cabbages. You can sew it up, embroider it, use a hot air gun to shrink it: it’s so flexible. I talked to the traders and was astonished at how so many of them had travelled thousands of miles before they landed up in the market. Imagine if you had to up sticks and travel to, say, Uzbekistan to make a living on the streets. Well, some of these people have done this in reverse. Their human endeavour is so remarkable, it needs to be celebrated – and this is what I do in my work.”

The Central Line is intrinsic to most E11-E10 dwellers, but an excellent network of roads facilitates a flight to the coast for Mary, too. “I make use of the rubbish that comes in to land on our beaches. I like the idea of the borders of England helping to tell stories of achievement and madness – and my picking up the unnatural flotsum and jetsum might also help save a bird here, a fish there.”

Mary’s work has been shown in central and east London, including the often experimental gallery Espacio, near Brick Lane. “I took part in a couple of exhibitions, one as a member of a group of artists from the Mary Ward Centre, and once in response to an open call for an exhibition called Heaven and Hell (pictured above), in early 2014.”

But the thing that always brings her back to Leytonstone is art. “I belong to a group called Creative Bloc, which is partly about meeting a range of people who produce different forms of art; and partly about mounting visual art exhibitions.

“Then there have been great exhibition spaces over the years such as Fill the Gap, the not-for-profit gallery in Church Lane by the station, and the wonderful Artefacto space down by Leytonstone High Road, which always sticks its neck out to be unusual and interesting.”

Finally, we mustn’t forget the Stone Space: “It’s Leytonstone’s answer to the White Cube,” says Mary. “It’s all here, isn’t it? Leytonstone has just loads to be proud of.”

Until recently Leytonstoner was funded by the free monthly print editions of our sister titles Gasholder and Kentishtowner, which have sadly closed due to advertising revenues in freefall. This means both Leytonstoner and our small independent network of online-only titles is under threat. As readers we need your support more than ever to keep delivering ‘good-news’ cultural stories across our wonderful neighbourhoods. Every contribution is invaluable in helping the costs of running the website and the time invested in the research and writing of the articles published. Support Leytonstoner here for less than the price of a coffee and it only takes a minute. Thank you.