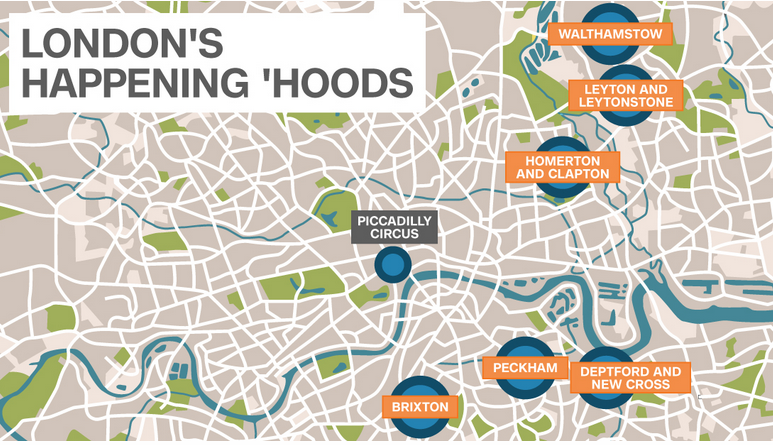 So it’s come to this. CNN – you know, the American channel you always end up watching in a hotel room when there’s nothing else English-speaking – has declared E10 and E11 one of their sixth most “happening” areas of London. That’s alongside Peckham, Homerton, Walthamstow, Brixton and Deptford.

“For every gentrification action there’s a ripple of reaction,” reads the breathless prose. “As places like Walthamstow shoot up in popularity – at one point last year it had the fastest-rising property prices in the UK – people go elsewhere. This elsewhere is now, for some, Leyton and its adjoining near-namesake, Leytonstone.”

But, they warn, unlike, say, crazy Brixton or Peckham, with their competitively youthful scenes, this is “arguably fashionable London in its more mature, thoughtful form”. There are “fewer crowded pubs featuring difficult indie bands, more bakeries and people thinking about schools and commuting routes.”

Finally, the piece goes on to rightly celebrate the area’s green spaces of Hackney Marsh, Wanstead Flats and Epping Forest, before reminding us that it remained “resolutely unfashionable” for decades.

But the only business in the area that gets props is All You Read is Love, a “pop-up bookstore/cocktail lounge/coffee shop set up by Danish siblings that’s proved such a hit it’s in danger of becoming a permanent fixture.”

Fair enough, but we reckon they should have brushed up on the Leytonstoner a little more if they really wanted the lowdown on E10 and E11.

This is box title
Read the full feature here. What do you think of CNN’s endorsement?