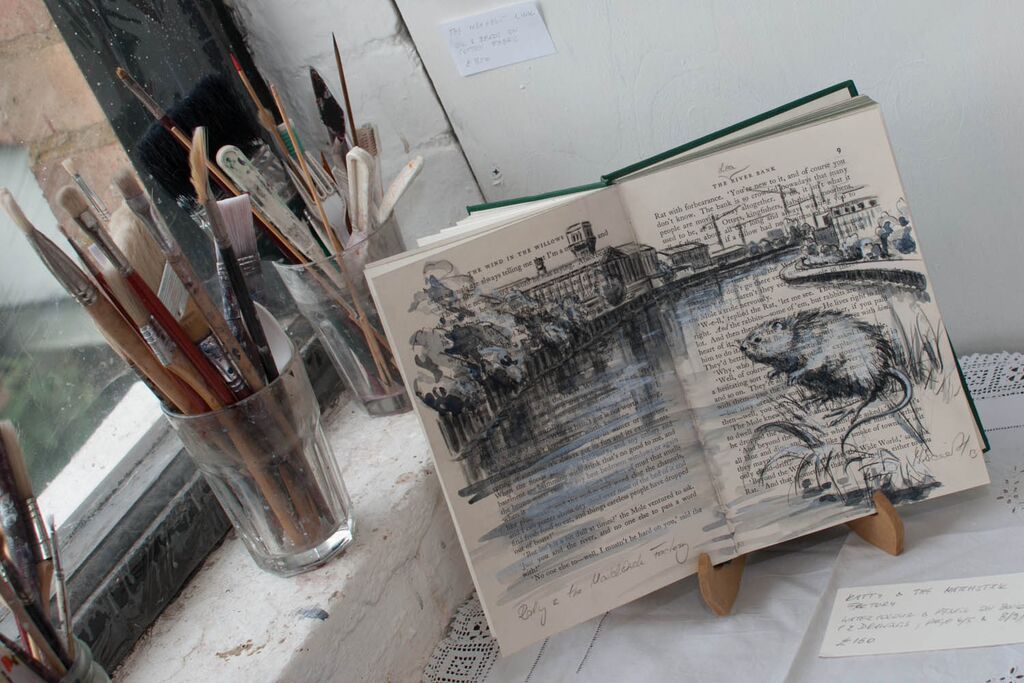 You can't do it all in a day - so don't even try. But we had a ball at the opening weekend of Walthamstow's biggest annual event. Here are some highlights

I love an art trail; it’s kind of a cross between festival and hide and seek, with a healthy dose of orienteering (switch off that GPS!) and randomness thrown in for good measure.

One of the country’s best is surely the Folkestone Triennial, whose attraction hinges on the appeal of some very high profile public art – from Tracey Emin to Cornelia Parker – strewn in locations visitors might not otherwise explore. (If you’re interested, I’ve reported on it every year for The Guardian).

But, until last weekend, I hadn’t ever made it down to one closer to home: Walthamstow’s highly regarded annual happening, established for more than a decade, which this year takes place across over 150 venues and features a whopping 4000 artists.

The knack of such a trail therefore is to take the concept seriously, but not that seriously; it’s as much about immersion in the culture of a particular town or scene rather than an exhaustive or educative ticking-off. You’ll always miss something (probably the *best* thing), so if you want to slope off for a beer, do it; and afterwards, pick up the map again, hunt out something new, and a new mini-adventure awaits.

So: the bloke and I (with amiable middle-aged Jack Russell in tow) took the overground to Blackhorse Road to begin our day down at St James Street, making a beeline for 56, the hip newish coffee house and garden. It’s displaying Andy Macgregor and Alex Cunningham’s interactive Fruit Shack installation, which makes a colourful focus upon entering. Better still are the highly evocative portraits of local craftspeople by Katie Jones at the rear. The coffee disappointed on this occasion, however: the water was scorching, the flavour burnt. But we’d go straight back just for the good vibes.

From “downtown” E17 (as I believe it’s called) we embarked on a mooch up the kilometre-long high street, stopping off at various venues along the way, from the abstract window installations at Oxfam (2-4 High St) to the bohemian landscapes and portraits in the upstairs room at the characterful Ricco’s Cafe (64 High St). We were less keen on the supposedly subversive anti-fashion industry photos at cavernous revamped boozer Chequers (145 High St), but it at least allowed us the chance to scoff a pretty good rib-eye and chips (£16.95) – and gulp down a sizeable glass of house red.

It’s been oft-remarked, of course, but Walthamstow Market really is brilliant, and makes a lively backdrop to any weekend stroll, art trail or not. Worm through the stalls, shops, cafes (don’t miss the legendary L. Manze pie and mash) and alfresco streetfood options: the rotisserie chicken stand looked particularly tempting. At Hoe Street, all manner of arty pop-ups and happenings awaits (a shame Bestowed Kitchen has finished, though).

Some Hoe highlights? Quirky photos of the marshes, taken from a window of a train by Stuart Moore, at palatial dark-panelled boozer Ye Olde Rose & Crown (53 Hoe Street); and the bright new E17 Art House (54-56 Hoe Street), showing provocative collages by Tim Fishlock (aka Oddly Head) as well as prints by Kirsten Schmidt from Michael Shann’s Walthamstow, a new book of poems. Even the “hipster” estate agents Stow Brothers (236 Hoe Street) are in on the act, with an exhibition of aerial photos shot using a drone.

But our top recommendation in this part of town is Mitre Studios (2 Greenleaf Road): upstairs, a collective of artists display sculptures, drawings and paintings; downstairs is the Paekakariki press, a stunning collection of machinery dating back over 120 years,  set up to continue the tradition of letterpress printing. Owner Matt will talk you through how the equipment works, and you could even consider buying one of his many books.

By this point we were drawn to the Village where, as the official guide tells you, “everyone you pass by has an Art Trail Guide in their hands.” And that was pretty much correct, making for a friendly, festival-tinged atmosphere, with a mix of open houses and shops and cafes along Orford Road, from the Debbie Bliss home store to Orford Saloon tapas bar, all displaying various artists of differing merits.

We hung out at Happily Ever After, a sociable interactive ‘multimedia’ event with live music and readings (Wingfield Road); at the Castle (15 Grosvenor Rise East), with its Reflections and Shadoes exhibition; and, up in the oldest part of the village, had a peek in the famous 15th century “ancient house” on Church Lane, open for Paul Tucker’s photographic exhibition.

Alas, the afternoon was sliding away, the sky now half blue, half fleeced with white clouds. We simply had to end up in the sybaritic environs of the Ravenswood industrial estate. The work displayed here provided a suitably edgy coda to the day, accompanied by a pale ale or two from Wildcard Brewery (don’t miss striking graphic linework from local artist HATCH).

We enjoyed the evocative Ratboy and Catboy at Mother’s Ruin, too: these pictures – of a dead rat against a viaduct, or a found item of clothing – seemed to epitomise the idea of urban art, with their focus on finding beauty in the ugly. (Our appreciation of these, it should be added, was heightened by at least one damson gin martini.)

As the sun finally dipped, we declared it more than enough for one day: the ten-year-old Jack Russell was now firmly on strike, snoozing in the evening rays outside the gin palace.

But we’re glad the Trail is on till June 14 as there’s still a whole load more to see, especially in the Lloyd’s Park/William Morris Gallery area. Oh – and dammit: we missed both E17’s new venue Gnome House and the Tales from the Launderette show, definitely ones to return for.

Stephen Emms is co-founder of the London Belongs To Me network, which publishes Leytonstoner. Follow him on @stephen_emms

The E17 Art Trail ends on Sunday June 14. There’s a packed programme of events as well as exhibitions across the whole postcode each weekend and during the week. Lots of info here or follow @e17arttrail on Twitter