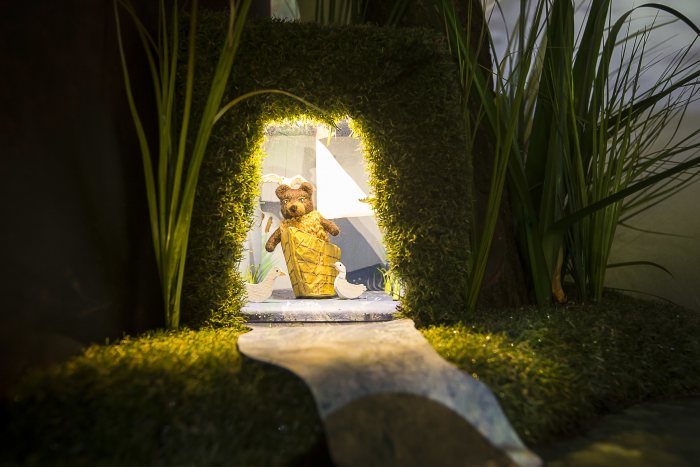 Any debate on eligibility for ‘national treasure’ status ends quickly once Michael Rosen is mentioned. The north-London based author, poet, broadcaster, campaigner and educator has pretty much mastered the art of creating joy for all those who encounter his work. So when given the chance to step inside his brain, who wouldn’t want to find out what was there?

The Discover Children’s Story Centre on Stratford High Street is playing host to the endeavour (and will do until well into next year). A charity that has dedicated a large Edwardian building and garden to inspiring children and adults’ imagination and creativity, their downstairs studio space has been transformed into a series of scenes from some of Rosen’s most famous poems.

A brilliantly constructed and decorated set was full of little details and images that gave delight to both the kids and grown-ups who were there. Technically described as a ‘multi-sensory installation’, we were at first led by a ‘story-builder’ to embark upon one of Rosen’s most famous tales – We’re Going on a Bear Hunt. We swish-swashed, squelch-squelched, splish-sploshed across until we found a cave and … the surprise was worth it.


While our daughter was quite happy to play in the cave all day with other children, the exhibition also contained other environments. A recreation of Rosen’s grandparents’ sitting room was there to explore, with family photos to admire. We could step inside a mock-up of his primary school classroom from 1957, desks facing the strict instruction on a blackboard “no breathing allowed”.

This room also had a glass case containing a painful-looking cane that Rosen’s teacher actually used. There was the ‘Dread Shed’ from another of Rosen’s published works, and an enormous (sadly inedible) chocolate cake that housed a kitchen full of 1950s food and equipment. Each environment had some relevant and favourite poems of Rosen’s, and after twenty minutes each area had people playing, reading, smiling and laughing at the genius of his words and the inspirations behind them.

The exhibition runs until April 2016, but on weekends there are six timed entry slots that need to be booked – and this is an outing that’s really worth making the time for. The Discover Centre is only a few minutes’ walk from Stratford station, which is connected to most of London these days.

As the winter draws in, for anyone with young families, you don’t need it to be a beautiful day to go hunting.

This is box title
Michael Rosen’s Bear Hunt is on till 10th April 2016 at Children’s Story Centre, 383-387 High Street E15. Find out more about times and prices here