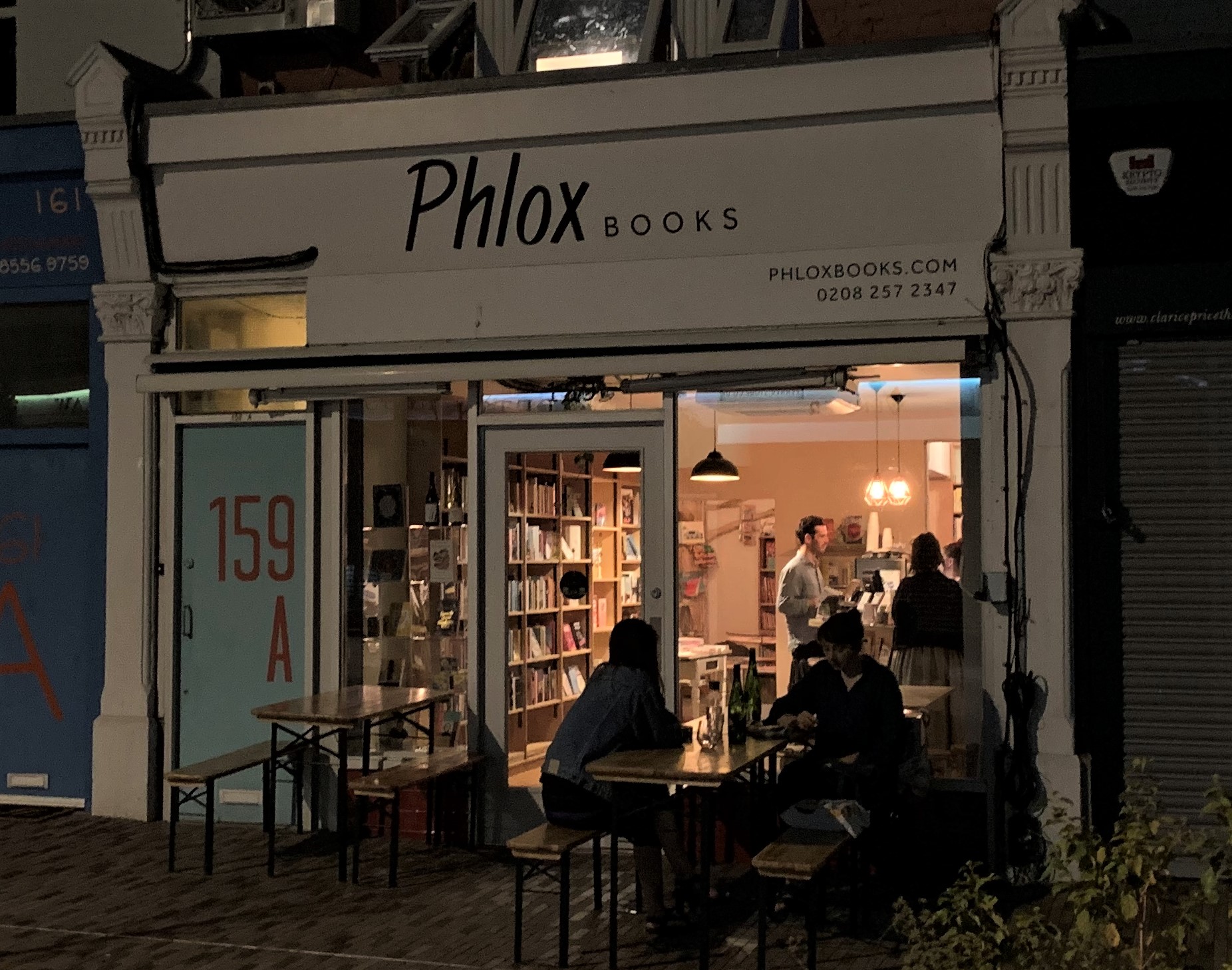 Everything you need to know about Phlox Books on Francis Road

Originally from Belfast, Aimée Madill has worked in other people’s bookshops in Ireland, Paris and London, but always dreamed of opening her own. Moving from Clapton to Leyton last year she quickly realised that E10 was missing a great bookshop and Francis Road was the ideal location.

What was your path to becoming a bookseller?
People say they love books but I would save my pocket money for batteries for my cat-shaped torch so I could read under the covers. I literally couldn’t stop. I did my degree in English Lit at Trinity in Dublin, then a Masters at UCL in European Culture.

After all that I decided I didn’t want to go into publishing, I wanted to work with physical books, so I became a bookseller, working for independent bookshops in Ireland and London. I set my eyes on working for Shakespeare and Company in Paris. It’s the ultimate destination for bibliophiles, with a rich history but constantly innovating. It’s a family business and roles are few and far between, but I got the job, moved to Paris and worked there for two years, on the shop floor, then helped set up their online bookstore.

Was it always your ambition to have your own bookshop?
Back in London I managed Stoke Newington Bookshop but I knew it wasn’t going to be my forever home. When work is the thing you’re most passionate about there’s only so long you can do it for other people. I set myself the goal of opening my own bookshop before I turned 30 (this September!) and started a secondhand bookstall on Chatsworth Road Market as a dry run. I was working five days a week, the sixth day on the market and the seventh day buying books.

I did that until I was eight months pregnant and lifting the boxes became too much. Starting a business on maternity leave seemed like a natural thing to do, so I gave myself a month’s hiatus after our daughter Juno was born in September, then got to work.

Where does the name Phlox Books come from?
My dad’s an architect and my mum was a textile designer. In the 1980s they opened Phlox, a lifestyle concept store in Belfast. As well as a shop there was a café and a design studio for custom work. As it was beside a police station and with the political climate in Belfast as it was at the time, it became too risky so they had to close and went on and did different things. It’s always been in the back of my mind that I could bring Phlox back. Sadly Mum died when I was 21 and after having my own daughter, it felt like the right time.

You secured your dream location, how did you do it?
I thought I was going to find premises but there would be a compromise. I knew it had to be Francis Road and tried all traditional avenues, then one day I was walking past the DIY shop and saw they were painting closing down on the window. I went in and using the gift of the gab got them to agree not to put it on the open market. It ticks all the boxes, it’s a lovely space, with beautiful frontage and good storage. I got the keys last Saturday and we’ve got one month and not much money to do the renovations. The first night I was in there pulling up the flooring.

What will you be selling?
It’s going to be a mixture of new and secondhand books. We’ll have outdoor seating and secondhand books at the front so people can stop and browse, then inside the aim is to be a really good general bookstore, plenty of new titles, classics, nonfiction and children’s books, of course. An iPad will never replace a book for a child of a certain age, because they physically can’t hold it.

At Stoke Newington some of the parents first came to the bookshop as toddlers themselves and this area deserves that. Further down the line I hope to add slightly more risky things, books from small publisher and emerging authors. We’ll have a small selection of cards and giftwrap, so you can come in and indulge yourself or if you’ve forgotten a gift, we can sort it.

What’s the shop going to look like?
My dad and my best friend are both architects so they’re helping with the plans, but we’re doing a lot of the work ourselves. The original floorboards are beautiful, so we’re just going to sand them. We’re having a lovely big counter as we’ll be serving coffee and hopefully wine and beer and a friend is making a table from reclaimed wood. It’s going to be very simple – when you have masses of books it can be overwhelming, so the palette will be off-white and black, with a touch of rose gold for the light fittings and some rugs to soften it. The idea is that it will feel light and airy, somewhere you want to settle down. And my French bulldog Huxley will be kicking around. The logo is based on the original Phlox one: it was very eighties, with solid ends and these funny triangles and squares, so it’s been softened and modernised.

Sounds awesome, when can we stop by?
We’re aiming for as soon as possible and the shop will be open from 9.30am to late into the evening six days a week. Yardarm close Monday and Tuesday and I think we’ll close Wednesday, so there’s always something open on the street. I’m applying for an Arts Council grant because I want to offer a good, cohesive set of events. I feel strongly that community is key and hope to bridge the gap between the old and new communities, with evening events such as book launches and author talks and, one afternoon a week, events for children like illustration or writing workshops.

We’ll serve Allpress coffee and we’re bidding for a premises license so we can offer beer and wine. The shop isn’t based on the need to serve alcohol but I strongly believe that if you can go to a gig or the cinema and have a glass of wine, you should be allowed that option and it’s a model that’s becoming increasingly popular at places like Molasses Books in Brooklyn and La Belle Hortense in the Marais in Paris.

I love reading but I’ve gotten out of the habit recently.
You just need to be inspired once and you get back into it. I used to read five books a week. Now it’s a bit harder and I’m down to about three, but I’m hoping when things settle down I’ll have more time. Not reading when you’re a bookseller is a dereliction of duty. My husband Johnny is using his maths and organisational skills to create a reference system, so we never miss alerting someone to a book we think is right up their street. Unlike Amazon, which uses algorithms for its recommendations, what we’re aiming to do is to know our customers, keeping records of their past purchases (if they want us to) and their likes/dislikes, so that when a new book comes we think they’ll love we can let them know.

Finally, what’s your desert island book and the one book everybody should read?
If I was being left on a desert island with no supplies so it was the last thing I was going to read I would take Rebecca by Daphne Du Maurier. It’s a mix of easy reading, suspense and mystery, intricately drawn characters and a little bit of love, minus the twee. It’s all about doubles and mirroring and every time I read it, I find a new one. The one book everyone has to read is Max Porter’s Grief Is The Thing With Feathers. It’s the story of death basically: a father is left with two young sons and a crow appears. You never really understand the crow’s role because if you did it would take away the power of the book. It’s part prose, part verse and when I finished I felt so sad that I would never read it for the first time again.

Phlox Books will be at 159 Francis Road, from 11th May. Keep up to date by signing up for the mailing list here and follow @phloxbooks on social

Are you a bookworm? Our two flagship print titles Kentishtowner and Gasholder have very rummageable Books sections. Read them here and here

This article was updated on 10th may