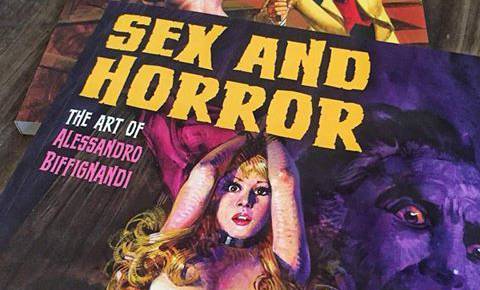 Korero Press is an independent publishing house that has been steadily churning out books on street art, pop surrealism, erotica and horror for the past four years. At the heart of the company is Yahya El-Droubie, whose love of lowbrow and kustom culture – a visual movement that has it’s cultural roots in underground comics, punk music and hot-rod culture, inspired him to set up the specialist publishing house.

After a career as a graphic designer freelancing for companies like Dorling Kindersley and Guinness Book of Records, Yahya explains he got “bored of making books for others” so he “self-indulgently” decided to produce that books that he wanted to buy.

With its HQ in Yahya’s home in Bushwood, Korero now gets a steady flow of collaborative projects submitted to their website, while also generating their own ideas and approaching artists directly. They recently produced a book with renowned street artist Ron English and legendary graphic designer Rian Hughes.

Of Yahya’s ten published books, his most popular include a guide to the hows and whens of custom lettering, and a series called ‘Sex and Horror’ which uses “top-shelf” comic book covers from Italy in the 1970s. He has a similarly risqué piece entitled ‘City of Pleasure,’ a graphic novel about Paris between the wars, currently in production.

The lowbrow art specialists are a small company, producing around three to four books a year. Most of Korero’s work is sold in the US, mainly in California but the visual focus of the books enables them to sell lots in Germany and France, while they also have printers in China.

“The UK market is strange,” says Yahya: despite being stocked in Forbidden Planet and Waterstones, he hopes yet to find more of a market locally.

This is box title
For more info head over to Korero’s website.