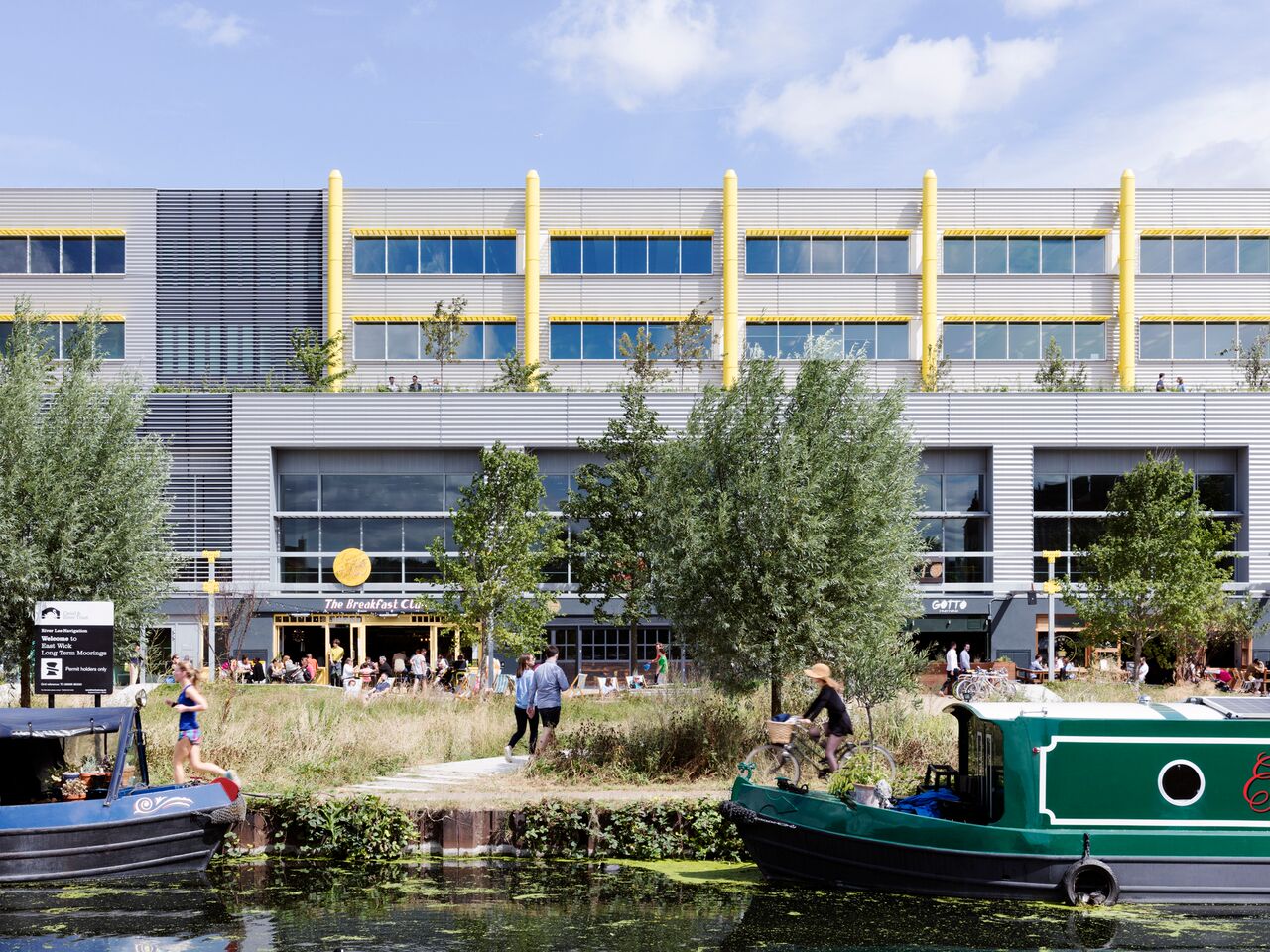 The overriding thing about the stretch of water which runs alongside the shiny utilitarian Here East complex is how tranquil it is. Narrow boats are moored up alongside the towpath, mowed lawns are covered in colourful deckchairs, and smartly dressed couples on bikes peddle past with ease.

This is Canalside (to give its official title), with what’s actually River Lee Navigation looking very slick indeed. And something about its sheer utopian newness inspires hope – a quality much of the revamped Olympic Park area shares, in fact.

On our first visit, during the summer’s June heatwave, the wild flower and herb-strewn meadows made this new urban resort feel almost southern European in the sweltering heat, with gangs of twentysomethings sprawled, clutching pints lazily, on the grass.

If you’re unfamiliar with its location, Here East is right opposite central Hackney Wick – moments from Bar 90, in fact – and part of a former London Olympics venue that served as the Broadcast and Press Centres, becoming a 24-hour media hub back in 2012.

Now it’s home to businesses, artists and educators, with startups and tech giants alike within its whopping 1.2 million square feet. “Radicals, reformers, visionaries, industry heroes and like-minded locals,” chirrups the blurb, “they’re all part of our East London heritage and its geography of innovation.”

Okaaay. But more on the agenda for the daytripper is the strip of bars, cafes and restaurants – all of which are second or third outlets from smallish London independents, with the exception of Breakfast Club, nowadays a proper chain. And there’s plenty of choice: streetfood junkies will make for chicken wings at Randy’s, while #cleaneaters can schlurp healthy juices at Mother.

On our balmy Saturday lunchtime visit we opted to eat at Shane’s (see below). A few days later, as torrential rain swept across the deserted towpath, and boat-owners battened down the hatches – we returned to explore the stretch in more detail. Ill-advisedly, perhaps…

We liked the fact that all the venues at Here East are dog-friendly inside. The more grown-up sibling of the Clapton original, Shane’s was no exception, welcoming in our panting Jack Russell to the spacious dining room, with its appealing open kitchen. We were surprised, however, that there was no sun cover on the west-facing terrace – the heat out there was intense.

Swerving brunch we chose from the small all-day menu, which specialises in “wild foraged seasonal produce”, arguably making it sound more exciting than it is. A spatchcock quail starter with hollandaise, rocket, watercress, apple mint was tasty to share, but the burgers didn’t quite live up to their billing.

Our advice would be, however, to order an onglet, well priced at £14.50, and a signature dish at the original Chatsworth Road branch – as we spied our neighbouring table’s order being brought over, we felt the spike of food envy.

Service was keen; and the waitress-recommended rosé was creamily dry – although at £28 a bottle it damn well should be. More info here.

If you’re planning a bit of a Canalside crawl, start here, the second branch of the Peckham original. You might roll your eyes at its USP: cocktails, craft beer and classic video and pinball games.

But engage the and smoky Peckham Pale Ale in hand, we learnt that they own 75 vintage machines, and the bar’s name is derived from the ‘four quarters’ you slot into the machines for a game (at least in the States).

Slightly cynically we wandered over to the play House of The Dead, a 1996 video game which involves shooting zombies – and actually had a ball. One Pac Man game dates from 1979, almost a museum piece, said the barman. More info here.

On our second, rain-soaked visit, we sheltered in this new watering hole from Five Points Brewery. It’s furnished simply – lots of blond wood and an appealing long counter bar – with a really good range of twenty beers, mostly from its nearby Hackney mothership.

For a bit of a kick, try the IPA – it’s wonderfully tropical and citrusy – but also carries a mighty ABV of 7.1%. Lighter options are the Pale Ale, still zesty, or the Field Day Citrus Pale, at 4.2% more than manageable and with profound notes of grapefruit and lemon zest.

We also enjoyed a pre-made cocktail from Tottenham’s Long Flint: grapefruit, sour cherry and mezcal was the right side of smokey, a rhubarb and vodka seltzer the unusually creamy. Great glassware too. Oh, and food comes from Capish, the meatball streetfood specialists. More info here.

Soho’s celebrated Mele e Pere opened up five years ago, and its success has allowed this laidback Italian enterprise to launch Gotto. Within its industrial-meets-rustic interior, a short menu comprises stuzzichini, antipasti and half a dozen pastas and mains.

First observation? Our negronis were served in cute bottles which you open yourself and pour over ice. Full marks for using Highgate’s Sacred gin, and a house vermouth that’s spicy and fruity by turns.

Initially very busy for an apocalyptically wet Tuesday – with groups of office workers enjoying the good-value #TenPoundTuesdays offer of antipasti and pasta – it quietened down by the time our starters arrived, as the doors remained atmospherically open to the downpour.

A textural tuna carpaccio, wafer-thin with finely shaved radish, won out over tender calamari with unctuous lemon mayo. And mains continued in this seemingly effortless vein: a special of ravioli, filled with mushrooms and ricotta, sang with buttery, fragrant sage, while a rib-eye, served Italian style with rocket and Grana Padano, was as ruddy inside as it was sealed and blackened outside (perfect, we should add, with a mighty Primitivo).

A side of al dente tenderstem broccoli was fired up by bright slices of red chilli. Scoffing an airy tiramisu, before disappearing out onto the flooded towpath, brollies protuding, we reflected on the difference a few days can make.