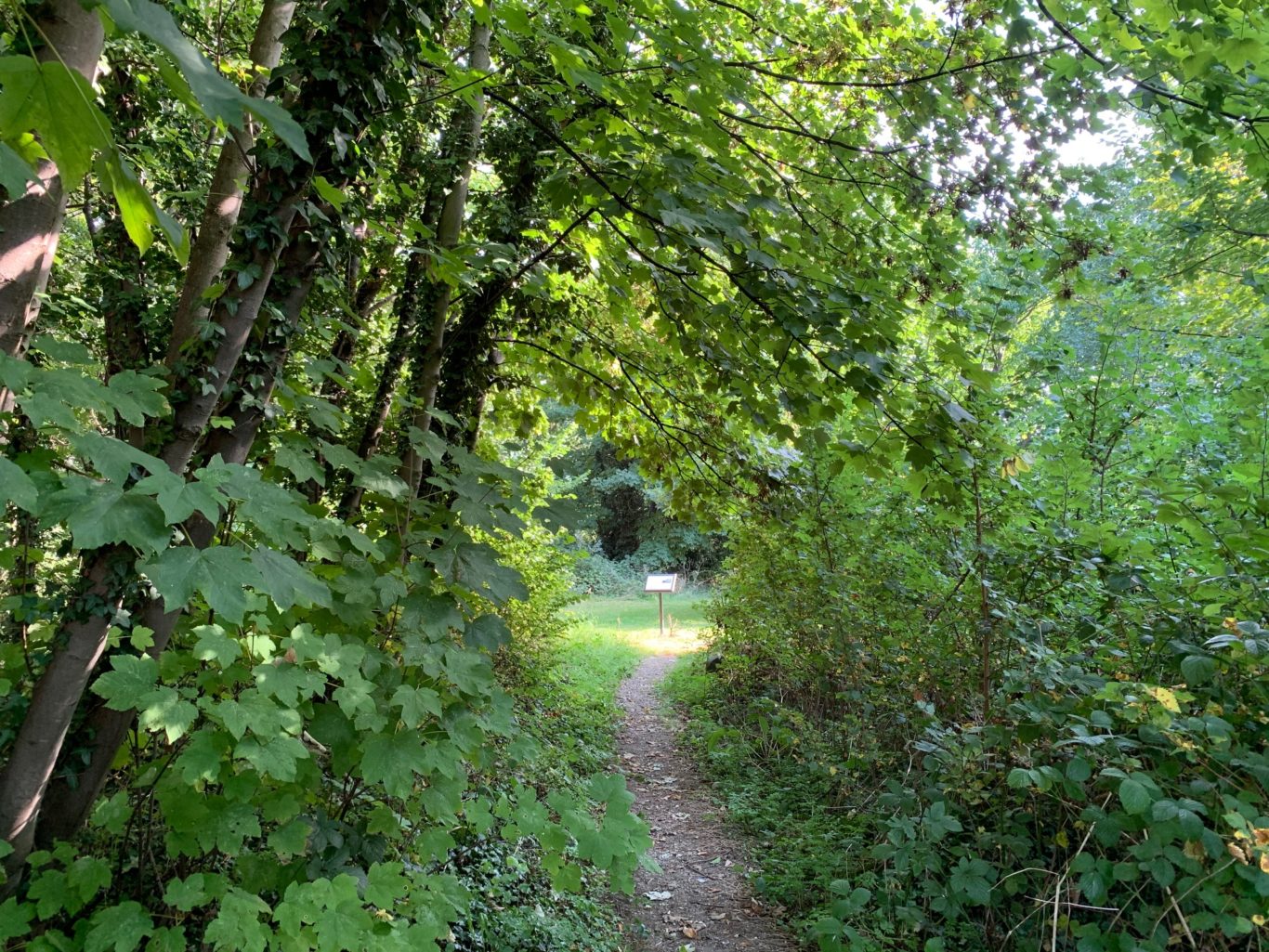 Having dominated Leytonstone for nearly 200 years, St John’s Churchyard is a surprisingly bucolic retreat, whatever the weather. And yep, autumn has truly kicked in.

Somehow I find its short trail – which illuminates its history, as well as flora and fauna, in a succession of plaques – an irresistible stroll before coffee at Wild Goose.

Stop for a moment and study the plaques: you can learn about everything from the story of the two yew trees to the landmine that fell in the Second World War.

That in itself is worth a moment: the churchyard was once filled with 19th century tombstones all destroyed by the bomb, which fell on 31st August 1940. While no-one was killed, others fell on Harrington and Vernon Roads, as well as Harvey, Mornington and Leyspring Roads, seeing substantial casualties.

Arguably more fascinating, however, is the plaque commemorating the overgrown Buxton Family Grave, enshrouded in deepest woodland. It’s easy to miss the sandy diversion that forks off from the main path to find it.

The Buxtons, it seems, were a philanthropic lot. There was Sir Edward Buxton, who lived at Leytonstone House – now bloody Tesco’s – who was one of those who fought to save Epping Forest. Go, Edward!

Then there was his own son – rather vainly also called Edward Buxton – who worked to establish and extend the Forest as a conservation area for everyone. (Some of their wealth, incidentally, came from the Brewery of Truman, Hanbury & Buxton).

Most notable of all however was the older Edward’s dad. Yep, this is Sir Thomas Fowell Buxton – and he’s the main noise here. The slave trade had been abolished in 1807, but Buxton continued to work for the abolition of the institution of slavery, and in 1823 helped found the Anti-Slavery Society. He even rose to become leader of the abolition movement in the House of Commons two years later.

After a decade of graft the Slavery Abolition Act 1833 was thankfully passed, dictating that all slaves in British dominions, excluding the East India Company territories, would be freed on 1 August 1834.

Despite the political significance of this victory, as many readers will know, the terms of the Act were actually unfavourable. Clauses had been added to provide the planters with a cool £20 million compensation, and to keep freed slaves in an ‘apprenticeship’ scheme until 1840. Yep: extremely far from ideal.

And yet it’s more complicated still. In 1833, Buxton actually supported the compensation and the apprenticeship scheme as a necessary means to achieve abolition, but still came under fire from other abolitionists. You can only imagine what would be happening if social media had been around at the time. Instead, we have paintings like this:

After abolition, at least Buxton continued to appeal for further measures to be taken to ensure the rights of the freed slaves, and for the end of the apprenticeship scheme, which happened in 1838.

Back to the grave in the heart of Leytonstone and here, on the fringes of the leafy churchyard, in the rather ragged confines Buxton tomb, you can see a number of headstones of children from the family as infant deaths were so common in the 19th century.

And no, Leytonstone’s connections to the transatlantic slave trade and its struggles don’t end there.

Horace Waller, a missionary, anti-slavery activist and campaigner, once occupied the Leytonstone Vicarage – now Matalan – where Abdullah Susi and a former child slave, James Chuma, lived for a period in 1874.

But that, perhaps, is a story for another rainy day.

If you’ve enjoyed reading this – or perhaps are featured above – then we need your help. Until recently Leytonstoner was funded by the free monthly print editions of our sister titles Gasholder and Kentishtowner, which have sadly closed due to advertising revenues in freefall. This means both Leytonstoner and our small independent network of online-only titles is under serious threat. Every contribution is invaluable in helping the costs of running the website and the time invested in the research and writing of the articles published. Support Leytonstoner here for less than the price of a coffee and it only takes a minute. Thank you.