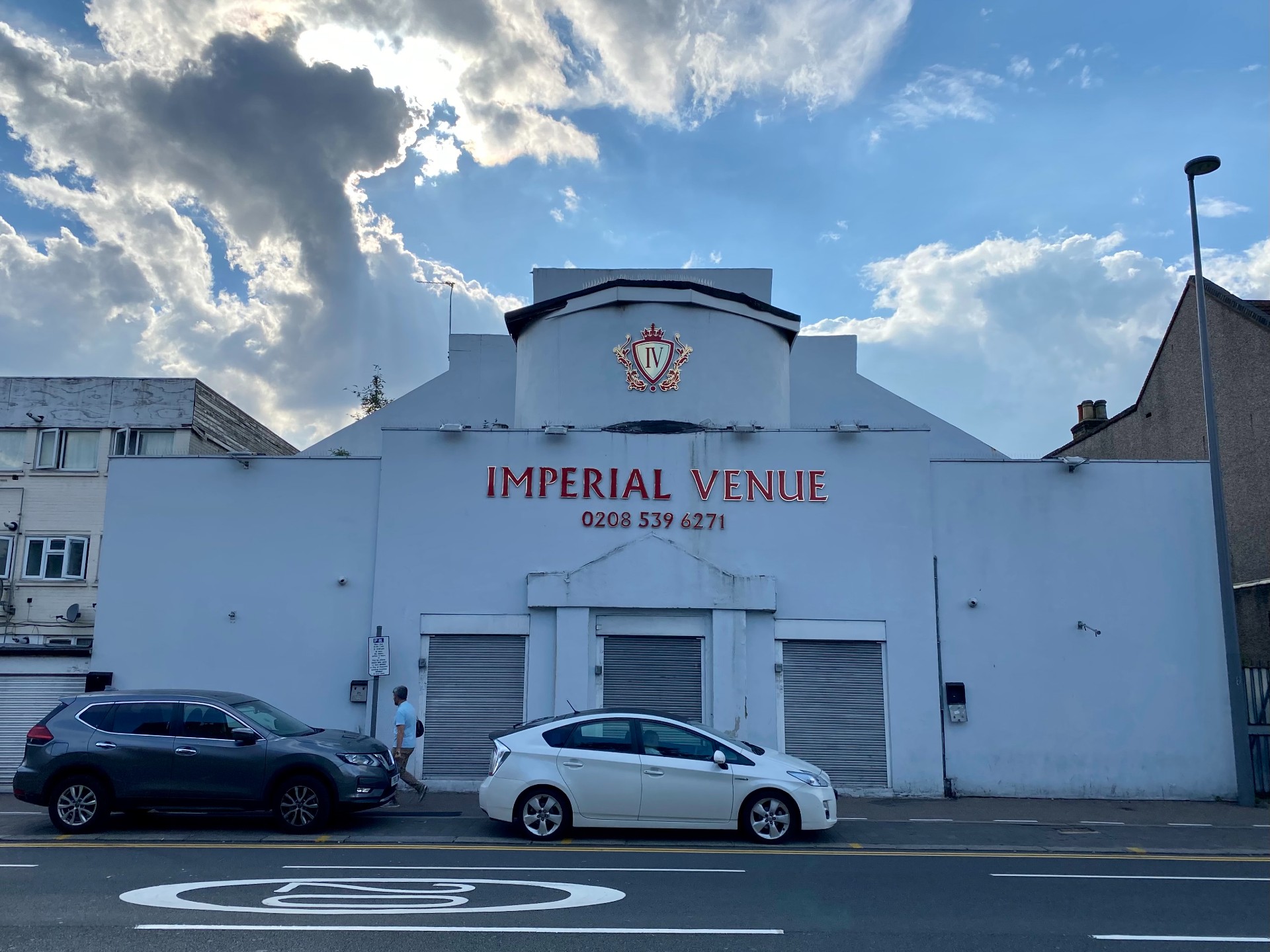 If you walk around our wider neighbourhood – as I’m sure many of you frequently do – look up: so many buildings used to be cinemas. And some were so obviously former picturehouses that whatever they’ve become today, you can’t miss their original usage.

Growing up in the 1950s and 60s (you can read my earlier local pubs feature here) going to ‘the pictures’ was a weekly or fortnightly treat. We mainly went to the Odeon at the corner of Church Road and Lea Bridge Road in Leyton (see pic, below). My dad always called it by its old name, The Savoy. It became a bingo hall years ago, and is now a Christian Fellowship Church.

It boasted a rather majestic interior, with a balcony and wide entrance. We used to attend the Saturday morning pictures, when it was full of kids, chatting, cheering, spitting down from the balcony. Every so often, in the interval between films, there was entertainment: kids dancing or a yo-yo competition.

My mum and dad also took me to the cinemas at the Bakers Arms. There was the Ritz (pictured below), opposite the current Tesco supermarket: although now Ladbrokes, you can’t miss its original purpose. A big picturehouse, it was seen as a step up from The Century, just further up the High Road towards the junction.

There’s no sign of that now, alas. I remember watching the last film ever shown there, North West Frontier, with Kenneth Moore and Lauren Bacall. Meanwhile, just over Lea Bridge Road towards Walthamstow in Hoe Street there was another small cinema, now a church. It was infamous for showing only ‘blue’ films.

Over in Leytonstone was a large cinema, The Granada, at the back of the department store Bearman’s, where the Matalan Car Park is now. I went to the Granada a fair bit when I was in my teens, but it disappeared in 1974, a decade before Bearman’s itself did. Opened in 1898, the store was described as ‘the Harrods of East London’: if you’d ever been to both, you’ll probably think this is a bit of an overstatement, although the ad in the subway to Leytonstone tube still stops me in my tracks.

But what was it actually like going to the pictures in the 1960s? Very different from today: you queued, usually outside, whatever the weather, and whatever the time of day. Once you had your tickets from the box office there was another queue inside. Eventually you got into the auditorium. Even then there was more queuing before you actually got a seat. So you waited at the side or at the back until someone got up and left. (No health and safety of course). Even though there were usually four of us, if two people got up to leave, two of us went and took the seats. So you rarely all sat together, certainly at first.

When the intermission came, lots of haggling took place so that you could sit with your family or friends. During the intermission, the lights went up, and a woman with a tray strapped to her came round with the choc ices. She may have had other ice creams – but why is it that I only remember choc ices?

The bizarre part of the whole experience was that you often started watching a film in the middle. You’d then stay so that you could see the beginning up the point when you came in. I’ve no idea how this worked with thrillers but everyone did it.

And so back to a couple of final local gems. Fortunately Hoe Street’s Walthamstow Granada (most recently the Mirth, Marvel & Maud pub, above), is currently being redeveloped as a 950-seat theatre, bar and restaurant, community space, garden terrace and more, all run by Soho Theatre after a campaign to save it.

A really beautiful building, I rarely saw a film there: however, in the early 1960s pop concerts were held on Sundays, when for trading law reasons, cinemas weren’t able to show the flicks. These were known, somewhat unfairly, as ‘one hit wonder’ shows. An act would come on, do their one hit, go off and be followed by another act. Some long forgotten acts included Del Shannon, Johnny Burnette, The Isley Brothers, Helen Shapiro, Bryan Hyland, Bobby Vee and Little Richard (not exactly a one hit wonder). The Beatles also played there: I didn’t catch them but I did – drum roll – see them twice at Leyton Baths instead.

Finally, further down Leytonstone High Road, is a former theatre definitely worth a mention. The State Cinema, the main featured pic above, was located at 615 High Road.

Opening in 1910 as the Premier Electric Theatre and with a capacity of 750, it closed in 1961 and was converted into a bingo club; it’s now a banqueting venue with a vaulted white ceiling. But I think you’ll agree it’ll always be a striking landmark that somehow harks back to the golden years of the area’s cinema history.

Do you know more about the former cinemas in the area? Get in touch: info@leytonstoner.london