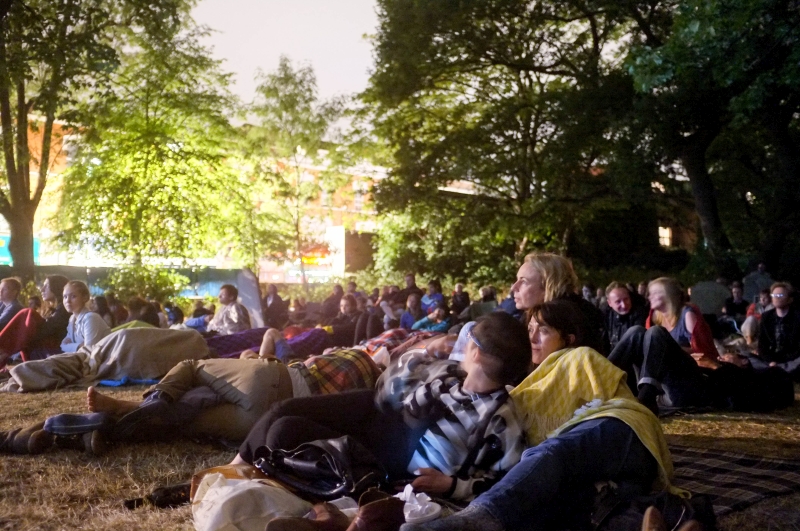 So, after a few decades of E11’s legendary film director being virtually brushed under the carpet locally – despite the subway mosaics and the eponymous boozer – he’s now back in a very big way.

Way before @thebirdsE11 fluttered into the postcode, Hitchcock’s Home quietly launched its classy summer fest a couple of years back.

This year it runs over three nights, including a a screening of the classic Vertigo and – clever – a ‘Vertigo’ tower tour of St John’s Church. You’ll know what that means if you’ve seen the film, and its 23-metre high tower and 96 steps to the top might even take on a more sinister meaning.

Once again the event takes place in the atmospheric setting of the cemetery and leafy grounds of the church, where there’ll also be a mini gallery of Hitch art by locals Artefacto (watch out for an interview with them soon), Hitch-themed debate in the cemetery, and a short before the main feature. And it’s all shown on a giant inflatable screen 30ft x 25ft.

Hungry? Course you are. Zara’s Treats are dishing up jerk chicken, rice, peas and coleslaw, plus there’ll be popcorn, brownie bites an dbakewell tart bites, with wine and cocktails from Burgess & Hall, and east London brewed beers from Pretty Decent Beer Co.

And the idea is to sit amongst the headstones in the cemetery, so don’t forget to bring chairs and blankets. There’s sure to be a chill in the air.