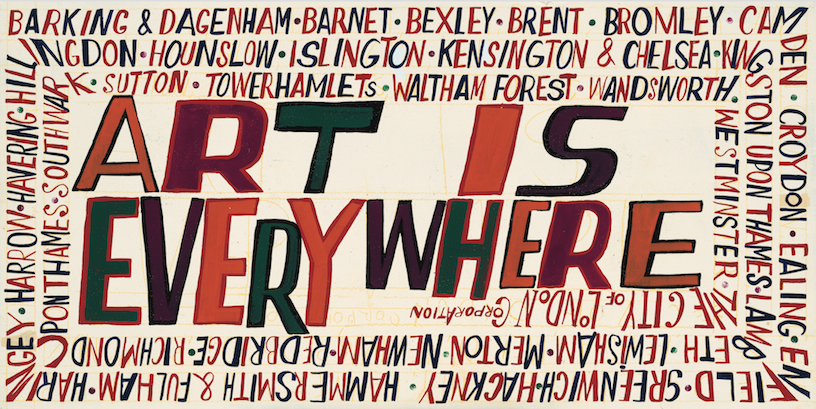 Lockdown notwithstanding, the mighty Leytonstone Arts Trail would normally start in just over a month. ‘We’ve postponed the planning meeting and this year’s event until things are back to normal,’ say the organisers. No surprise, of course, there.

But in the meantime, let’s take a look at E11’s history of all things creative, which stretches as far back as its Victorian terraces – and shows no sign of stopping yet.

From William Morris onwards, the roll call of famous and influential artists in the area is huge, often demonstrating a spirit of democratic inclusivity that blurs boundaries between creating and consuming art.

Did you know the East London Group grew out of one of the earliest adult education evening classes? Set up in Bethnal Green, its first members were tradesmen who struggled to pay for their materials from meagre wages. They were encouraged to make their own images, not copy others and so their work captures their surroundings – including many images of Leytonstone, Wanstead and Stratford. Showing initially in the East End, their work won critical acclaim and two – Elwin Hawthorne and Walter Steggles – went on to show at the Venice Biennale of 1936 alongside Barbara Hepworth and their mentor, Walter Sickert.

Via the Royal Academy, Sickert was associated with the sculptors Frank Dobson RA and Jacob Epstein KBE; both giants of the early 20th-century art world with local connections. Dobson had attended Harrow Green school, Epstein lived in Loughton and he painted many fantastic watercolours of Epping Forest (somewhat at odds with his main oeuvre).

David Bailey, born in Leytonstone, captured many of his iconic swinging sixties photographs in the East End.

Coming to attention around the same time was Keith Albarn, a highly talented and influential artist who has continued to work over many decades on his pattern and belief art. He showed several times at the ICA, with one in 1976 leading to the book Illusion in Nature and Art by R L Gregory and E H Gombrich. (His son, Damon Albarn OBE, was honoured with a blue plaque at their Fillebrook Road house, and his song Hollow Ponds refers to the boating lake off Whipps Cross Road.)

Stuart Freeborn’s first big film, 2001: A Space Odyssey, was released in 1961 – although he is much better known as the creator of Yoda in the Star Wars trilogy. He was born and raised in Grove Green Road and was recently also honoured with a blue plaque; his work has inspired the creation of street art in the area.

This era may actually have been the heyday of art in Leytonstone, where a quirk of town-planning introduced a decade which saw the area house the largest population of artists in Europe. The Department of Transport’s plans to cut through the suburb with a motorway had the unexpected consequence of providing cheap short-term leases for low-rent live/work spaces via the artist-led organisation ACME. Many now famous names were residents – Paul Noble, Cornelia Parker, Grayson Perry (two Turner prize nominees and one winner).

Protestors against the road squatted other properties and made art part of their non-violent strategy; the protests made national TV and the theme of eviction to make way for developers’ plans resonated in Turner prize-winner Rachel Whiteread’s piece House in nearby Bow in 1993.

The protests were formally commemorated in a sound-walk artwork by Graeme Miller, one of the evicted artists. Commissioned by the Museum of London in 2003, the piece is a three-mile walk alongside the road, relaying audio testimonies of those who lived and worked where the motorway now runs.

In 2001, the Leytonstone Centre for Contemporary Art was born in an E11 garden. Brainchild of Royal Academician, Bob and Roberta Smith, the piece – a small and charmingly hand-built shed – went on to tour and inspire replica exhibition spaces internationally. Recent Bob and Roberta works encourage people to Make Your Own Damn Art, and recently, in his campaign for art education – Art is Your Human Right.

5. The birth of the Trail

In keeping with this spirit is the Leytonstone Arts Trail. Started in 2008, the concept developed open-studio and open-house formats in a festival that draws together artists, businesses and residents, providing a different way to navigate and experience the neighbourhood.

The Trail has grown each year since but remains true to the original vision of inclusivity and experimentation. Its history to the present day maps an interesting period in the area as rents and property prices soar while the local high street, like many others, is at a low ebb.

Many of the artists have forged close links with independent businesses and community schemes working to bring back the soul of the high street, and offer a local alternative to the culture of sanitised corporate consumerism. Interesting collaborations, groups and spaces have sprung up throughout the area and each year the Trail fosters new ones.

These days the Trail has dozens of exhibitions and events with all art forms from traditional oil painting to performance and installation represented. There are great opportunities to join in with workshops, tours and talks. The Trail was a BBC Get Creative champion in 2016 and fully supports the initiative to encourage more people to see, think and make.

And beyond 2020? Let’s hope it’s not the end of Creative Leytonstone, a geographical quirk of social and economic history that has fostered and inspired so many artists over the years.

Pre-Covid 19 the Leytonstone Arts Trail ran annually every first week of July at venues throughout the area. More info here. Follow @Leytonstone_Art on Twitter and @leytonstonearts on Insta for news of the Trail later this year. This article was originally published in 2016, with a new edit updated in May 2020.

We’ve just reached our 5th birthday, but sadly things aren’t as joyful as they should be. Until recently Leytonstoner was funded by the free monthly print editions of our sister titles Gasholder and award-winning flagship Kentishtowner, which have sadly closed due to advertising revenues in freefall. This means both Leytonstoner and our small independent network of now online-only titles is under threat. As readers we need your support more than ever to keep delivering ‘good-news’ cultural stories that celebrate our wonderful neighbourhoods. Every reader or business contribution, however big or small, is invaluable in helping the costs of running the website and the time invested in the research and writing of the articles published. Support Leytonstoner here for less than the price of a coffee and it only takes a minute. Thank you.