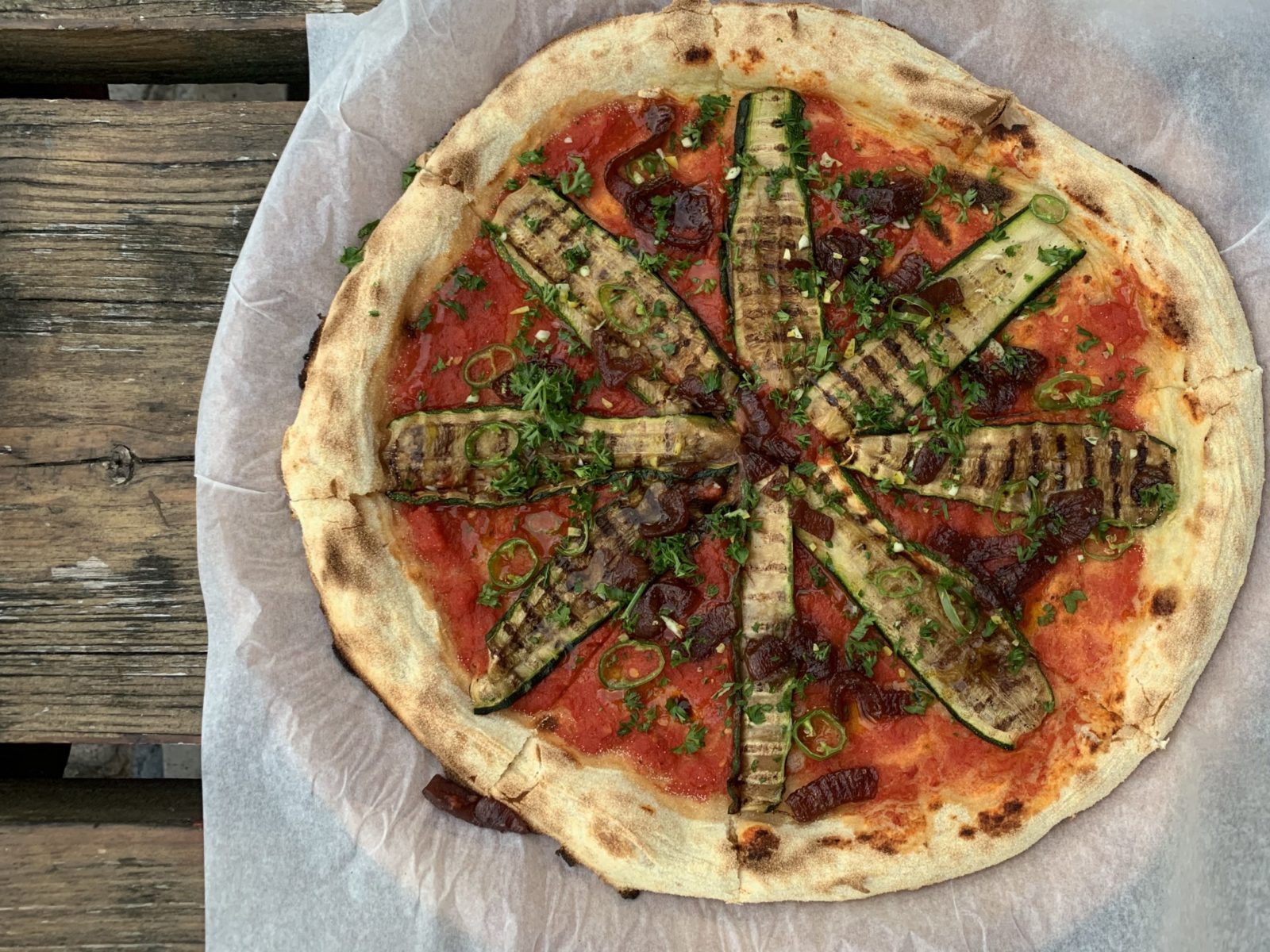 We love the tucked-away Tav for a pint in its sunny rear garden, and think the melding of original Victorian boozer with contemporary extension has been handled rather well. But while a steak night before lockdown left us unconvinced, any residue of ‘meh’ evaporated last week after gobbling its fantastic new burgers. We would have chosen the beef, but the server said medium wasn’t an option, so we plumped for poultry instead. And boy, was it a corker: a sturdy sesame-seed bun hugged a towering monster of thick, juicy tender chicken thigh cooked in a light batter with crumbled Cheetos, garlicky mayo, a little hot sauce, pickled cabbage and gherkins. 100% delish – and, we decided, better than the ‘Pluck Off’, a simpler buttermilk-fried chicken sandwich. More info here, 119 Harrow Road E11

2. There may be regular markets on Francis Road

Who remembers the relatively short-lived Coronation Gardens Farmers Market? In the light of this year’s Francis Road Street Party being such a hit, its hard-working Facebook community group is now abuzz with talk of a regular market. The resounding response from most locals was that it’s basically A Good Idea and would bring more footfall, which in turn would benefit all concerned (a bit like it does with, say, Clapton’s Chatsworth Road market). And specific clashes can be avoided with the right curation of stalls – after all, lovely though the thoroughfare currently is, there are plenty of retail gaps, from art and fashion to more varied and international streetfood offers (like the popular Yakitori stall at the weekend). But the question is: how often? Once a week? Once a month? Quarterly?

So we swung by Leytonstone’s most idyllic boozer for the first time since post-lockdown the other day; how charming it is with everyone out on the street (let’s hope it’s not too noisy for the neighbours). Better still, their new pizza kitchen is extremely tasty. Cutely named new pop-up Papi’s Munchies offers a short list of wood-fired sourdough pizzas, including the winning Epping Forest (£8), a vegan affair with grilled courgette, caramelised red onion, gremolata and green chillies (our main pic, above).  Also recommended is the Posh Proscuitto (£10) with mozzarella, tons of ham, rocket and cherry tomatoes. Take a breezy walk on the Flats first and stuff your weather-beaten chops after. Follow @papismunchies.leytonstone, The North Star, 24 Browning Road E11

We haven’t given our fave little interiors and lifestyle store a shout out for a while so what better excuse than the fact that it’s coming up to its third birthday? The other week owners Tiff and Lucie posted on Instagram that it was three years since they picked up the keys, with the shop opening around this time back in September 2017. If you don’t know the story, you read our original interview with them here. In the meantime, congrats and here’s to another three (at least). More here, 200 Francis Road E10

While we’re talking Francis, we’ve long had a crush on Strange Brew – and right now its handy sand-pit seating makes for perfect socially distanced relaxation in the sunshine. And as for the Walthamstow-baked sweet treats? Someone stop us now. One thought: with the absence of a much-needed bar on Francis Road (yep, we know Marmelo and Yardarm serve during the day), maybe a little alcohol/evening license would lend the street that much-missed relaxed European cafe-bar vibe? Follow @strangebrewe10, 179 Francis Road E10

6. To Be Consumed boasts a new outdoor terrace

And speaking of booze (yes, yes, we know), E11’s under-the-arches wine bar and deli To Be Consumed is, we think, such a civilised kind of place. It’s recently just celebrated its first birthday and, the other warm evening, seemed to have really found that elusive post-lockdown stride. The bigger outdoor terrace was packed with a lively post-work kinda crowd, and streetfood regulars Mexican Fried Chicken had bagged the food stall spot (expect a rotating schedule over the autumn). We kind of wanted to stick around, but had already booked dinner round the corner and so legged it after one glass. Still, next time. Follow @tbcwine, Leytonstone High Road Station, Arch 1 Hitchcock Business Centre Station Approach, High Rd Leytonstone, E11 4RE

If you’ve enjoyed reading this – or perhaps are a business featured above? – then we need your help. Until recently Leytonstoner was funded by the free monthly print editions of our sister titles Gasholder and Kentishtowner, which have sadly closed due to advertising revenues in freefall. This means both Leytonstoner and our small independent network of online-only titles is under serious threat. Every contribution is invaluable in helping the costs of running the website and the time invested in the research and writing of the articles published. Support Leytonstoner here for less than the price of a coffee and it only takes a minute. Thank you.