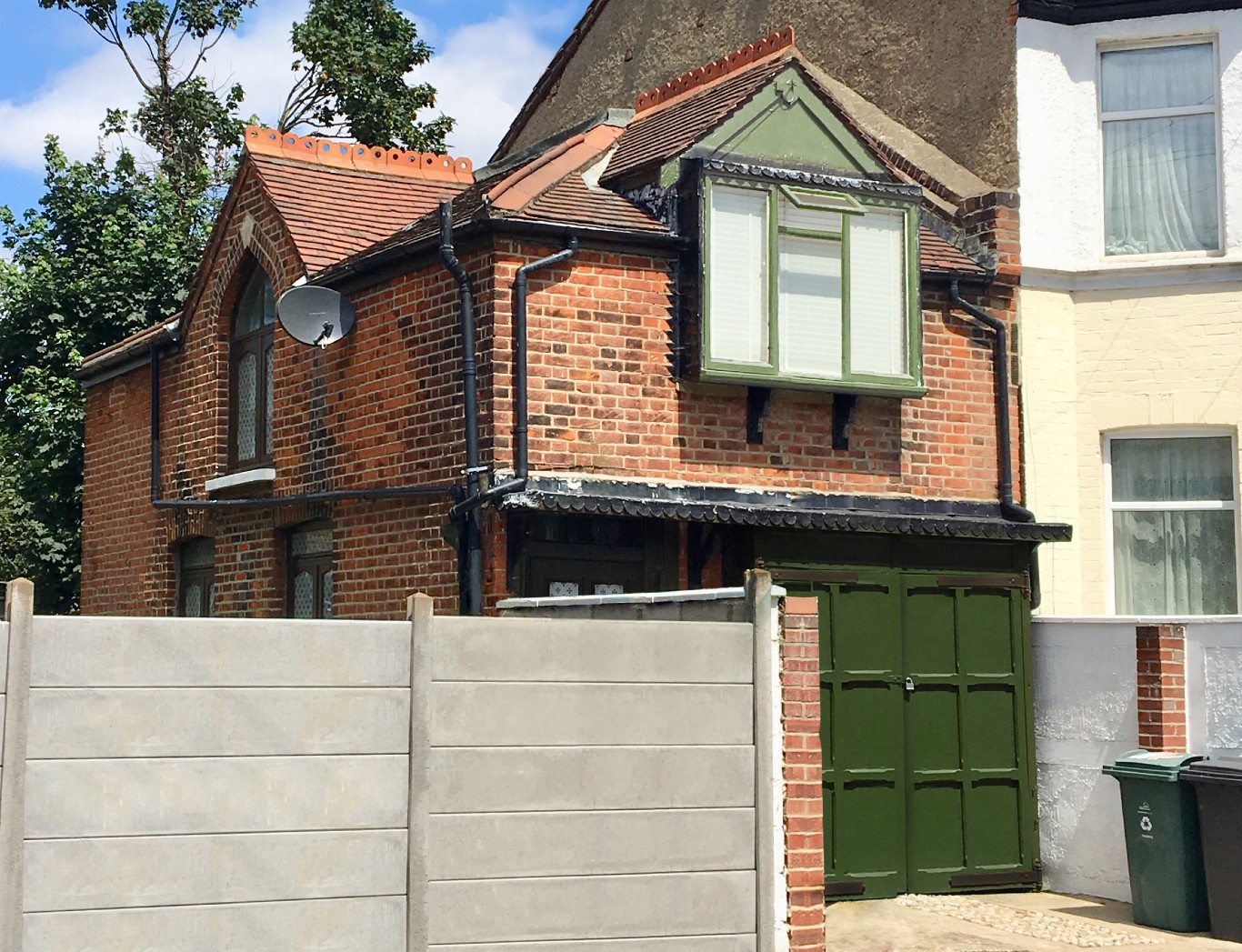 Leytonstone’s architecture: from James Lane to Derek Jacobi – and ‘Hollywood’

Last week, I confessed to readers my lifelong interest in our local houses – and their real (and sometimes imagined) histories.

As you may recall, the humbler Edwardian and Victorian terraces, some restored, some needing a bit of love, tell the story of over a hundred years of modifications.

Still, the relationship with buildings, history and lives continues in my head as I walk down any given street in Leyton or Leytonstone. So here are five more to look out for on your weekend daily walks.

It’s LGBT history month, so here’s a picture of Leytonstone-born Derek Jacobi’s childhood home. Jacobi’s parents moved to the end house in 1938, and according to a Times article, subsequently purchased the plot of land adjacent and extended (I did have anxieties that any future blue plaque not be put on the extension, but in the event that it is, knowing it was done in his father’s duration makes it an authentic positioning).

Jacobi describes his upbringing as working class, but they were doing alright if you ask me. I had it in my mind’s eye that he slept in the box bedroom, but he was an only child so it must have looked out to the back garden.

Perhaps a teenage Derek paced around the upper floor in a bedsheet for a toga, or skull-in-hand quoting Shakespeare, whilst pram-pushing neighbours quietly felt sorry for his parents. Little did they know.

The house itself appears to retain its original front door and porch, with a curiously shallow transom window which has always troubled me (I don’t doubt the authenticity of the stained glass, but the wooden structure is so thick and clunky). Originally named Gloucester Road, the street was renamed Essex Road South at some point, presumably during the 1965 boundary changes.

This showstopper of a coach house stands on the corner of Boscombe Avenue and James Lane. Constructed around 1900, it would have housed either a carriage, gig or new-fangled motor car. It’s interesting to note that despite its diminutive size, it’s technically a two-story structure – the upper floor being a combined attic/half-floor. Its original double doors (and the fact that the garage has not since been converted into a living room) are a remarkable survival. Note the ogeed gothic window on the side elevation.

This house and adjoining terrace do not appear on the 1893 ordnance survey map, but are present on the 1915 edition – by which time we are firmly in the age of the car. Without census research, it remains a bit of mystery – to all intents and purposes, it stands in the garden of a house in Boscombe Avenue – however, the avenue itself wasn’t quite grand enough to have employed a chauffeur, so we have to assume it was not affiliated with the avenue, and was an independent business of some sort.

A terrace of jerkinhead bay roofs on Abbott’s Park Road, bookended both sides by open gables. There are two short terraces with these generously portioned beauties towards the very top of the road. There’s just something about them that feels inherent to another land. Note the additional curvature inset within the bargeboard.

Here’s a rare sighting of ecclesiastical-inspired door in Leytonstone. This one’s on Burghley Road, and has all its original acid etched glass. The other doors on the road had their glass replaced with various twentieth century offerings, which led me to wonder if any mullions or transoms had been sawn off – but no – the original was a main expanse of glass.

There’s something about these twin buildings that conjures a feeling of ill-fated Hollywood glamour from the silent era. Impossible to do justice by photograph, one painted red, the other green and named ‘Forest Lea’, they sit at the top right hand side of the Green Man roundabout, and look upon a landscape ravaged by 1990s town planning.

Two communal hallway stained glass crittall windows survive, with understated flowing ribbons in a style which is not overtly deco, but intrinsically from the era. I can imagine the star of The Artist living here when he was down on his luck and being saved by his terrier. There is too, an otherworldly, almost American-ness about the concrete urns in the garden, and the remnants of interwar year planting just add to the romance.

For more of Michael’s choice picks of houses across E10 and E11, read the first part of this feature here. And follow him on Insta @michaeldelalama

Is it really our 6th birthday in February 2021? Wowsers. Sadly the ongoing, endless lockdown means our current ad revenue is almost non-existent. As readers and local businesses we need your support more than ever to keep delivering ‘good-news’ cultural stories that celebrate our wonderful neighbourhoods. Every contribution, however big or small, is invaluable in helping the costs of running the website and the time invested in the research and writing of the articles published. Support Leytonstoner here for less than the price of a coffee and it only takes a minute. Thank you.