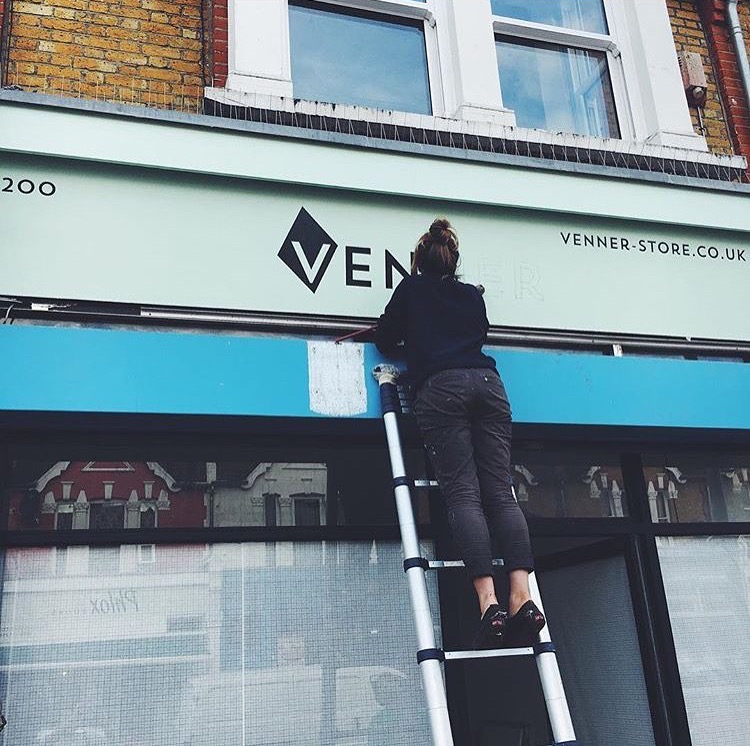 Ever since Mia Warner moved from leafy Hampstead back in 2015, the area’s shop fronts have been getting smarter. It’s not a coincidence: Mia’s the talented signwriter and typography enthusiast behind the hand-painted signs adorning many of Leyton’s best-loved businesses. Consequently she spends much of her working life up a ladder. We grabbed ten minutes of her time, when her feet were on solid ground to talk letterheads, working on the Warner Estate and her local faves.

How long have you lived here?
I moved in with my other half a couple of years ago, after leaving the family I lived with [as a live-in nanny] in Hampstead. He had already been here for a couple of years before I moved in, so I have him to thank for discovering wonderful E10. I lived in the same house in Gloucestershire until I moved to Brighton for university. I like to think living in Brighton for four years eased me into city life. Everything I needed was 20 minutes away, and of course the wonderfully artistic and fabulously liberal community. I miss the sea, but I’m completely and unashamedly addicted to London.

Was signpainting always the ambition?
It was always the passion, but not the ambition, due to a lack of confidence and belief I could make it a fulltime job. It only became an actual goal when I moved to London and started getting more interest. It’s not hard to get into if you have the right mindset – if you love lettering and want to paint signs there are plenty of amazing teachers who run workshops and are worth learning from. The signwriting community is tight-knit, humble and incredibly generous. One of the rules amongst letterheads is that you leave your ego at the door – as soon as you’re in a position to help someone else learn, you turn around and help them.

What was your career path?
I studied graphic design in Brighton and became obsessed with typography. But really that obsession was always there: my school project covers were always given ten times more effort than the projects inside. After Brighton I moved home with my parents and did graphic design for a social media marketing agency before moving to London to be a live-in nanny. All the way through I took on small projects, an A-board here, some wedding calligraphy there. The projects got bigger and more people started asking for signs, to the point where I couldn’t carry on working full time. Eventually I moved to Leyton (wahoo!), quit the day job, moved into Leyton Studios and the rest is history.

It seems like quite a traditional skill, how popular is it today?
Signwriting died for a while in the 50s and 60s when vinyl signs arrived, but it’s definitely back with a vengeance. In my opinion, this time around it’s better because, for the most part, people are choosing to have their signage painted by hand when there are other options available. They are investing in us and our craft and, in turn, they get real passion and soul in their signage. There’s a real appreciation of the hand-rendered now and that’s brilliant.

Tell us about some of the work you’ve done around E10 and E11?
When I first moved to Leyton I saw Carol Deeney up a ladder when Deeney’s was first coming to life and noticed they didn’t have a sign. Unbeknown to Carol and Paddy I had never painted a shop front before, but they trusted me without question and Deeney’s became my first fascia and my second home.

After that, Dan and Eliza were amazingly receptive when I asked if I could paint Yardarm and I started meeting and painting for all the brilliant businesses that were either already here or moving into Leyton and Leytonstone, including Aimée at Phlox books, Tuesday at The Northcote, Chris at Eat17, Lucy and Tiff at Venner, Thea at Leyton Yoga, Dean at The Garden Room, Tom, Victoria and Adam at Perky Blenders, Natalie at Marmelo, Louise at Pause, Gunac at the Lion & Key and Clare and Lawrence at Kettle & Ryan.

Phew! Tell us about some of your favourite jobs.
Painting on a Reliant Robin for John McAllister, a Leyton-based painter and decorator. John has put so much effort into renovating the van and I felt like I was putting the final flourish onto a project that has been very important to him. To be asked to do something like that is unbelievably flattering. And painting a really fun mural for This Time Next Year, the new co-working space and cafe opening on Ruckholt Road – keep an eye out for exciting things happening in there.

We’ve spotted your work on the Warner Estate too.
A couple of years ago I had a local resident ask if I could replicate the Warner-style number on her transom panel. This introduced me to the Warner project, which I am fascinated by, and I walked around the areas where you can still see the remnants of the old numbers, taking pictures and sketching. I’ve done a fair few Warner-style numbers since then: I think it’s brilliant that residents want to keep the integrity of the original designs. I’ve put together some style sheets replicating the numbers as closely as I can, but there are very subtle differences in different areas, so I tend to work with what’s going on in the particular road I’m working on. I see painting house numbers as an honour, it will always be special for me to be able to put that stamp onto someone’s house, especially locally.

What would you ideal local Saturday involve?
It would include breakfast from Deeney’s or down at Here East (read our guide here), a wander to the Francis Road shops, tacos from Homies on Donkeys at Wood Street Market, dropping in to visit the Wood Street Walls gang in their studio, a walk round Hackney Marshes and finishing off with pink gin from Mother’s Ruin, then Muga Pizza from The Northcote on the way home. Clearly I’m cuisine-led so I’m lucky to live in an area with such good food.

This is box title
To see more examples of Mia’s work and to get in touch check out her website and follow her here @mia.warner.signpainter